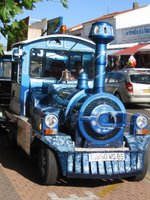 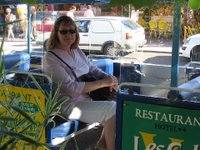 Choo Choo!
We decided to go off for the afternoon to La Tranche Sur Mer. When the children were small it was our favourite place for a day at the ‘seaside’. Perhaps it was because the tide was out and because it was the end of the season, it’s just not the same any more. To cheer ourselves up we decided to take a trip on the train.

It’s amazing what you can learn on a little train ride. La Tranche doesn’t really go back much before the early fifties when the old wooden lighthouse, which was blown up in the war, was rebuilt. The soil is very sandy but despite that there are lots of allotments where vegetables are grown. You should have seen the beautiful pumpkins! Most of the houses are second homes and as the train driver didn’t point out any famous names we presume there isn’t anyone of note there. He seemed to toot and wave at everyone and most people waved back. He stopped and pointed out a restaurant where the best seafood is served all the year round and everyone dashed out to greet him (I wonder how much he was paid for that?). We were also taken through some forest which we didn’t know was there.

If we’d have been with Dom or Olivier they would never had let us go on the train, so perhaps it wasn’t so bad they don’t come with us anymore. After that we went and had steak and set off for our traditional walk on the jetty. It was closed off completely. It’s made of wood and I suppose is not safe anymore. I think the next time we go it will be with grandchildren, we’ll certainly take them on the train
Posted by Anji at 8:55 am

That is a super little choo choo! My boys would be very envious (I'm slightly envious too!)

Pewari naan; I don't think it was there when our chidren were small. Hope you can all come and have a ride one day!