All aboard the Transbordeur 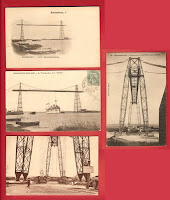 Last Friday Rob and I went for a day out and spent some of the time visiting the transbordeur de Martrou (Transporter Bridge) near Rochefort sur Mer. The bridge was built in 1900 by Ferdinand Arnodin, who built several in his time. The bridge at Rochefort is the only one left working in France, The rest were destroyed in WW2. Passengers and vehicles were pulled across on a platform, driven by steam. I was amazed at how quiet and smooth the trip was, although no longer powered in the same way. 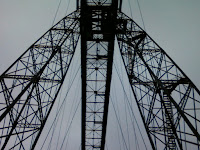 Since I’ve been selling vintage postcards I’ve learnt to appreciate bridges. Look at the beautiful patterns of the girders. Mr Arnodin, who didn’t learn to read and write until he was nine because he used to play truant, loved solving problems. 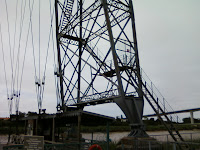 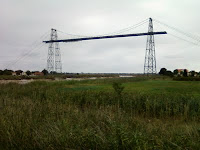 The bridge was in use until 1967 and also appeared in the film 'The young Girls of Rochefort' (new link) released the same year (If you watch till the end you'll see how the bridge works). Now after being restored and made safe since the 1990s, tourists can cross back and forth, visit a very interesting exhibition about the bridge and explore the surrounding countryside.

That's very interesting. I'd never heard of a bridge like that! Would be great to see it in action.

I love going across the Usk on the Transporter at Newport (though young Katie was ever-so-slightly scared, and stayed in the car last time we went). You used to be able to walk across the top for a shilling. High though it is, it feels about ten times higher still....

The French seem to have a passion for bridges!

They casually build spectacular bridges while the Brits spend for ever on public enquiries as to wether anyone would want to cross the proposed gap or would anyone be slightly offended by its probable ugliness.

Was a film not made about a bridge in the north east being sold to native Americans?

Véronique: There are six working bridges left. Would the one in Brazil be the closest to you?

Dru: They told us about the Newport one! Don't think I'd like to walk across the top. There's another one in Middlesbro' and Warrington was the other I think.

caroline: I think today there is as much of that here as there is in the UK. I don't know about a bridge being sold, i'll have to Google that one.

What an unusual structure! It's really a ferry, not a true bridge, in my mind. But fascinating for sure! And seeing the post cards just makes your post that much better.

Thanks as always for your great posts!

Way cool, I had never heard of such bridges or seen them in action. Would love to "ride" one! Neat post card too!

fascinating, thanks for that, I love interesting history bits and pieces.

DB: Thank you. It certainly was an original way to cross a river.

Don: They are very quiet and smooth - come over and visit it!

Iwasn'tblogged: It's amazing what you can find when you look around. We've been here for 26 years and have only just really had time to explore