I spoke too soon. Yesterday afternoon Olivier’s friend phoned him as he had a flat tyre and couldn’t find the jack to lift the car. So we very kindly lent him ours. Olivier came in an hour later with a bent jack.

Today, minus the half hour lie-in I was looking forward to, I have been out looking for a new jack (I should be so lucky!). Nowadays they make what I can only describe as a camping stove look alike. Rob phoned the Renault dealer and all he could offer was a new jack at 200€ and told rob to try the scrap merchant. There is one nearby so I dragged Olivier along with me and we got one for 10€ cash. Rob will collect it this evening as I didn’t have any cash. The nice man remembered that we used to have a Citroën 2 CV… twenty years ago.
Posted by Anji at 5:22 pm 6 comments:

Email ThisBlogThis!Share to TwitterShare to FacebookShare to Pinterest
Labels: cars, son time, The post about the jack

A bit of everything

Two good pieces of news to start the day bright and early. The most important is that Debbie’s father is fine. They had to wait and worry for a lot longer than necessary for some results due to the slow wheel of the NHS in the UK.

Then, when I put AOL on to look at my emails this morning I saw that they have a feature on France in 1900. This should stimulate interest in vintage postcards. All in all a good start to the day.

I spoke to Dom on her birthday. Her parcel had arrived okay and she was pleased with the contents, especially a purple jacket exactly like this one. Though she still insists she prefers the orange/pumkin one! She is teaching English twice a week now and really enjoying it. The job at the library is very demanding indeed. It’s very quiet so she’s on MSN most of the time AND getting paid for it. The afternoon of her birthday was going to be spent baking and preparing food for her party in the evening. One of her friends was kindly lending their flat as Dom’s has only got standing room for about 4 people (one in the shower) and two of her friends were coming from Paris. I haven’t heard anything since…

Olivier is being driven to lycée this week by his friend who is an apprentice chef. The building where he studies for 1 week every month is next to the lycée so they go together. Half an hour extra in bed all round, much appreciated by me. It’s strange to see them going off, it only seems 5 minutes ago they were sitting on the doorstep together, in the sun with their toy cars.

Rob and I worked flat out for a few days last week. Ebay put on a special offer for professionals (that’s us); free placements. You can imagine we prepared a maximum amount of postcards and managed to put on 180. We’ve been selling groups of cards too, to clear our stock, which have been doing very nicely. I was rather proud of this group, which now has a bid I’m pleased to say.

Click on the image for a much better view.. 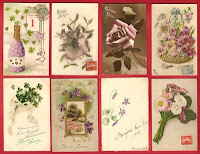 Dom is 20 years old today. I haven’t managed to speak to her on the phone yet. I imagine her struggling back from the post office with the parcel we sent her. I remember driving to the hospital in the early hours of the morning. I started to panic when we hit the streets around the market and there was a lot of unloading going on. We got blocked in for a couple of minutes…. The rest is history. Yesterday she phoned me for a recipe for mustard cake, she’ll be making her famous carrot cake and asked me for other ideas. Hope you all have a great time tonight Dom!

I got my page a Day diary out for 1975 to see what I did on my 20th birthday. It was a Friday so I went to work as usual. My friends at work gave me a couple of books ‘The Fortune Tellers’ and ‘Natural Magic’. In the evening I went to see some friends and we went out for a drink. It was the start of a new relationship which lasted 4 years. I didn’t have the time to write much else.
Posted by Anji at 9:45 am 11 comments:

It’s strange how the subconscious works. Just before Dom left she went to the hairdressers to have her hair cut, it looked really good but the real test is when you have to do it yourself. She washed her hair just before she left and it hadn’t dried properly when I took her to the station, so I didn’t really see how it turned out. Last night I dreamt that Dom was home and I asked if she’d turn round so that I could see her hair. She obliged – she’d just washed it and it was still wet! I had my hair cut last week. My hair is very fine and needs a little lenghth to hold it down, it's too short and all over the place - at least it will grow.

Christian phoned this evening. He’ll probably be coming to stay at the end of November for a few days!!
Posted by Anji at 9:21 pm 6 comments:

I participated in a scientific experiment last week. I had to finish around 200 sentences and not use pronouns, be grammatically correct and all in French. Needless to say I was hopeless, I was also a bad subject as I’m not a native French speaker. The idea was to see if people used the correct forms under stress, I suppose to see how the subconscious takes over. The sentences were messed around a bit to trip you up and I kept reading qui as que which changed things a lot. It certainly was stressful for me. The only other experiment I’ve taken part in was at the common cold unit in 1984. I had flu and was given placebos.

I took Dom back to the station this morning and collected Olivier from a friend’s on the way back, how’s that for ecological co-ordination? (Or perhaps convenient children)
Posted by Anji at 10:19 pm 9 comments: