I thought that they were just marks on the postcard but it seems that something (smoke? ectoplasm?) is coming out of the window.... 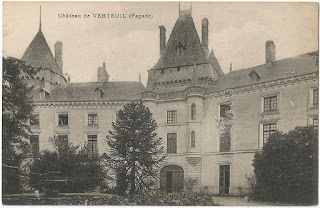 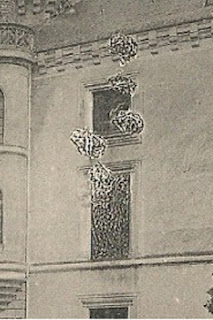 Catching up with the children

Olivier returned to his bank town just a week ago. He enjoyed two weeks holiday and the weather was good. We didn’t see too much of him as he was out with friends or in their swimming pools. What we did see was good, he’s got the first year of his Master’s degree under his belt and he enjoys where he’s working. He went to his first wedding this summer – yes, even his friends are starting to get married. He also showed me pictures of babies: two of his friends are now proud fathers.

It doesn’t seem 5 minutes since I met up for an afternoon with two of my ex bank colleagues. We all had our first babies within a month of each other and managed to get together when they were around 6 months old. They were all 28 this year!

Dom and J-M are coming over to see us tomorrow. They will be moving to the UK in a week or so as Dom will be starting a post as lecturer at Essex University in September. They will be living near to Colchester and I’m really looking forward to exploring the banks of the River Colne, as I’ve already looked on Google Earth. We’ll be visiting them in September, as well as Christian & J.
Posted by Anji at 5:06 pm No comments: