Spring has certainly sprung here now and today was quite hot. The other day while walking through the park I saw a squirrel run up a tree. He was so confused by the mowers and tree surgeons that he didn’t notice me.

The flock magpies which were at the side of the marsh seem to have disappeared. I noticed that someone had been putting maize down, whether they were feeding them or poisoning them, I don’t know. We haven’t seen any dead birds around and there was a notice on one of the huts by the shore not to leave food for animals or birds (there is a colony of wildcats there too – if they survived the flooding a month or so back). The magpies aren’t so present in the gardens across the road either. It looks as if the jays they chased away last spring have made a comeback.

The most exciting event to report is that when Rob and I were coming home from a walk the other day along the side of the marsh a water rat European Water Vole swam up the stream alongside us for quite a way. We were talking as usual but it didn’t frighten him/her off. I was wondering if it could be a beaver, but a dive into the water showed off a ratty tail

This morning when I opened the kitchen shutters I almost stepped on a toad. He was very still (pretending to be a stone) and stared at me.

Now you must go and see the adorable, furry, bundles of fun that Mary Lou is babysitting at the moment.
Posted by Anji at 10:22 pm 11 comments:

We call ourselves human beings, but we don’t always behave better than animals. Please watch until the end … you might learn something.
Posted by Anji at 7:37 am 5 comments:

I was just writing a comment on a forum on Wednesday evening at 9 o’clock when I was told that the system was closing in a minute and the seconds started counting down. Of course I panicked and tried to open Word in order to save my comment and close down both AOL and Firefox – impossible within 40 seconds. It was impossible to hide from Rob that I had a problem and he accused me of going where I shouldn’t and letting in a virus. Half an hour later his laptop went through the same. (Na, na! ) Try as we could there was no way we could get back online, the scanner had disappeared and we could do nothing to correct the problem. I sent Dom the names of some files in a text message to check on Google that they weren’t viruses. I think that she was probably asleep as it was getting close to midnight.

Rob and I are opposites; he was sure we wouldn’t be able to carry on our business on eBay and I went to sleep positive that a good night’s rest would mend the computer problems. We were both wrong. I could use Word the next day, but I couldn’t copy and paste, so I could still prepare the descriptions of postcards for sale and record them onto Rob’s key. Rob could then put the descriptions online at the cyber café. What to do about the scans we just didn’t know. Olivier phoned as I’d sent him a text warning him not to bring his laptop home as we had a virus. I explained what had happened and he looked the symptoms up on Google. Apparently McAfee sent out an update which took something in Windows as a virus and put it into quarantine. I don’t know about your country, but in France McAfee are used by hospitals and universities, so you can imagine the chaos.

When Rob arrived home on Thursday evening we set about starting to re-install XP. This was another problem because our computer was more up to date than the original discs. We decided that we’d get someone to clear off the computer and we’d start again.

Olivier arrived home on Friday lunchtime ready for battle. Using his laptop, he could get online. French websites are useless; very pretty to look at and that is all. The link to the solution to the problem went nowhere. We both thought of looking at forums and he found exactly what he wanted. Rob’s laptop was easier to fix than the main computer but after three hours we were back in action.

All I have to fix now is the media thing so that I can listen to my music again - and would you believe that Deezer France was out of action this morning?…
Posted by Anji at 9:33 pm 3 comments:

Time for a few numbers.

April 1st was the anniversary of us moving to the village way back in 1986. It was also the third anniversary of my postcard business and yesterday Rob called me over to his laptop so that I could see that we now have 3000 cards online! In a couple of months (17th June), it will be our 25th wedding anniversary. It can’t be right - that only happens to old people.

I heard my first cuckoo of the year on Wednesday 7th.
Posted by Anji at 4:45 pm 4 comments:

I woke up at four this morning having had the most terrible nightmare: The computer was making awful noises so I thought I’d better turn it off in case it blew up. I turned it off, but the screen stayed on and I could see images of people in slavery and destruction, ruins of buildings. The people in charge weren’t quite human and I started to realise that we’d been invaded from another planet. The dreadful realisation set in that there was nothing anyone could do about it. I felt like going outside to look at the sky and then thought better of it and stayed inside.

It was all quite logical once I was awake (though I didn’t get back to sleep again). The computer noises were Rob’s snoring! I think the scenes of labour and destruction came from the Lord of The Rings films. I can’t shake that feeling of dread though.

How about a holiday?

The prison on the Ile de Ré has been up for sale and has been bought by Club Med. This is the famous prison where ‘Papillon’ and many other prisoners set off from to serve their sentences of hard labour overseas. The new owners are obliged to offer the present staff new jobs. The thought of an ex-prison warden as holiday camp host conjures up all sorts of pictures up in my imagination. I think that they might have to do something about decorating the rooms too.
Posted by Anji at 4:02 pm 5 comments:

If you have a half hour over the weekend with nothing to do but twiddle your thumbs. Twiddle them while listening to David Sedaris. He is so funny – it’s really interesting to see how an American views Europe. The programme will be left up to listen to for a week.

You could also pay a visit to my new store which is just on the right with the pretty flowers. I’ve used them to create some gifts and things. I’ve also used our eBay Store picture too. I’m rather pleased with the results and I’ll be looking at my other favourite postcards to use to make things. Please let me know what you think. 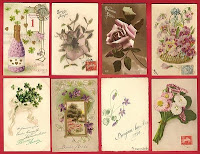 I’m not sure whether I’ve written about this before or not. I haven’t managed to find any references to my blogs when I looked on Google.

A couple of years ago I was looking at the back of a postcard and saw a reference to a French submarine sinking in 1939 a few weeks before the outbreak of war. One of the officers was a young man from La Rochelle and I discovered that just before the submarine set off for the last time the dog that lived on the submarine ran off and two of the crew went after it (fortunately for them). ‘How strange’ , I thought, ‘a dog on a submarine’.

I’ve recently had a new pupil who is half English. Her mother married a French submariner and came to live in France. She never spoke to her daughter in English, hence the lessons. During the war this submarine fought alongside the allies and many of the crew married English and Scottish girls. My pupil explained that submarines had dogs as mascots. Not very hygienic in such a confined space but the dogs would collapse before men if there were problems with the air supply.

I wonder if the dog who ran away sensed something.
Posted by Anji at 10:25 pm 7 comments: