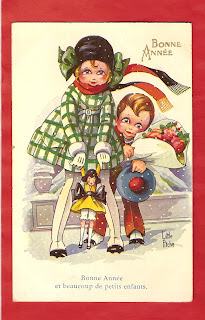 "Happy new year and lots of little children" I only wish you those if you really want them.  Have a safe and happy new year's eve.

This morning in town I saw a red admiral butterfly.

I bought the turkey this afternoon.  Why do I always forget how ugly they are?

No Christmas story this year.  It's in my head, I haven't got round to writing it down.  If you would like to read them, past stories are here and here.
Posted by Anji at 6:10 pm 4 comments: 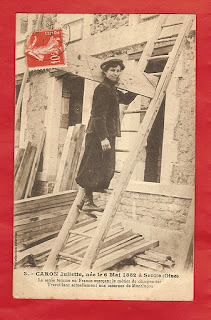 I imagine that this postcard dates before 1910.  The young lady was called Juliette Caron, she was born in 1882 and was the only lady carpenter in France. She was working on the barracks at Montluçon when this picture was taken. The back of the postcard tells us more;

"The lady carpenter works these days at the machine depot.  Dad has seen her.. she works well they say.  She works hard and doesn't mind people watching her"
Posted by Anji at 9:26 pm 2 comments:

Blast from the past

A very good friend of mine from way (way, way) back is sorting out photographs and she sent me these: 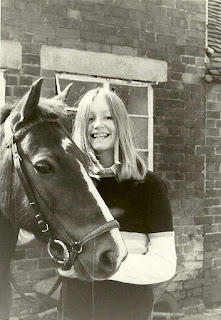 I was 17 when this was taken 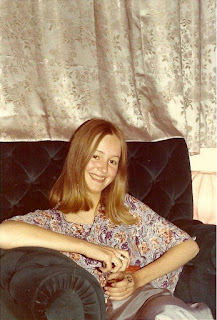 My 18th birthday.  I got drunk on whisky mac.  The next day I had my first hangover.  Oh happy days... I was so thin.

(Thank you Melinda for bringing back some magical memories)
Posted by Anji at 2:55 pm 7 comments:

That's the name of the storm that crossed France at the end of last week.  When I was teaching, I had a pupil called Joachim in one of my classes in the special section.  He was famous for farting, especially during the first class of the day.  Knowing that, I suppose you could say that the name fits.
Posted by Anji at 3:34 pm No comments:

Two auctions and a lot of washing

Last week landed us with two auctions.  At the beginning of the week we were in Chinon.  The weather was cold but sunny and we even had time to explore the town a little.  This time we stayed in a new hotel/motel which was situated within walking distance of the auction house.  We bought some interesting postcards, some of which will appear on Time and Oft in the near future.  We returned home on Tuesday morning, hoping to visit the 17th century town of Richelieu on the way.  It was raining so hard we just stopped for a cup of coffee.  On arriving home we unloaded, unpacked, re-packed our bags.

Wednesday morning we set off for Limoges.  The weather wasn't so kind and we didn't really have much time to explore - again!  There is an excellent restaurant opposite the hotel where we stayed, so we ate without getting too soaked. Another successful auction for us, though a little chaotic as the experts were holding 6 auctions plus viewings over two days.  The drive home on Friday was difficult because of the bad weather.

When we arrived home there was a message from Olivier saying that he would be home on Saturday.  Since he arrived I've been washing and drying clothes non-stop.  He assures me that he does go to the launderette on the campus - I wonder how often? I hate the smell of his KFC uniform.  Reminds me of when Rob came off his bike and broke his elbow.  He slipped on some grease accidentally left in the road in front of a restaurant, his clothes were ruined and had that same awful smell.
Posted by Anji at 3:32 pm 2 comments:

Being creative - sort of

I spent 7 hours last Friday furniture building. The instructions said an hour and a half for two people.  I was on my own.  I've still got blisters on my hand from turning the screwdriver and I had lots of aches and pains on Saturday.  It's satisfying to watch the joints close snugly as you tighten the screws.  I am very proud of the result.

This week I've put up the Christmas decorations - and very nice they look, even though I say it myself.  I had a bit of a panic when I couldnt find the crib, but they were all there waiting for me in a different box to the one I thought they were in.

I haven't even thought about food much.  As we have a couple more auctions coming up, I won't be thinking much about it next week either.  One of the local supermarkets has a drive in now - I might have mentioned it before.  It will be so nice not to have to struggle with an overloaded trolley in an overcrowded shop.  I suppose the drive in will have a queue a mile long.
Posted by Anji at 9:48 pm 5 comments:

In case I disappear

I had another final warning from the FBI this morning in my spam.  This time with four exclamation marks...
Posted by Anji at 10:23 am 8 comments: