What have I been up too? Working for the main part. Remember I talked about MIL falling down the stairs? She’s still in pain and very, very tired all of the time. She had been talking about selling her lovely house, she even found a flat/apartment, but in the end she’s decided to stay. We’re worried about her being so tired.

My mum is due to go to court as a witness, next week, I think. She was sitting in a café having a coffee with a friend one day. They were seated near to the toilet door and when one young lady went into the toilet she kicked my mum’s bag in with her, took the money and when she came out kicked the bag back under mum’s seat. Fortunately the café owner’s wife saw this from the kitchen. They chased the lady down the road and managed to recover most of the money. Unfortunately she has pleaded not guilty so everyone must go to court.

Dom and Olivier have both had exams, so I’ve been very stressed and not sleeping too well. Dom has finished. These are the end of 3 years of study. She’s decided to go on for another 2 years after all. The bookshop can wait.

Olivier is just over’ half way through his Baccalaureate. So far so good. He had to travel to another town for his English oral. He said the examiner was a mixture of my sister and Rob’s sister-in-law so he was immediately at ease with her. He’s really worked on his maths, which he took today. He thinks he should have a good mark.

Dom is coming home tomorrow, so I’ll know all of her gossip then. Her boyfriend will be coming to stay in the middle of next week. We haven’t met him yet, so I’m nervous about that. He’s very, very clever and Dom says a really nice person too, so it should go well.

We might have a couple of auctions to go to over the next fortnight. Nothing happens for months and then it’s action stations all round. I’d just like to sleep now for a while and wake up when it’s all over!
Posted by Anji at 8:40 pm 8 comments:

In the past I always listened to 'Go 4 it' on Sunday evenings after the Archers on BBC Radio 4. 'Go 4 it' was a magazine programme for children and was always fascinating to listen to. The BBC discovered that the average age of the programme’s listeners was - ahem- fifty something, so they axed it.
Posted by Anji at 8:43 pm 7 comments: 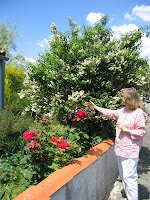 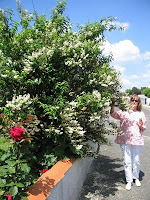 A couple of pictures of my butterflies – only you can’t see them. The flowers look good though, don’t they? The blossom and the rose petals have all gone with the wind.
Rob took the pictures
Posted by Anji at 3:53 pm 6 comments:

How to use up lots of paper

We voted on Sunday with about half of the population of the village who were eligible to vote. It was Olivier’s first turn to cast his vote. The thing that annoys me about French elections is the amount of paper involved. A pile of lists of each party’s candidates is laid out on a table, you then pick up a list from each pile with an envelope before you go into a booth to put your chosen list into the envelope. The rest goes into a bin. I refuse to pick up a National Front list.

The week before the election every person of voting age receives an envelope with all of the same lists and a paper about each party in it. The idea is you can take your lists with you if you want to. The paper gets recycled and the envelopes are the kind that can be used again. I prefer the English system BUT I remember that my voting ticket had a number on it. They could check who you voted for if they wanted to. d

One of Rob's colleagues was running as a candidate for the Royalist Party. There party was too small to have lists distributed everywhere so you could download them if you wanted to. Would you believe this? They only had women’s names on their list because it is obligatory and most of them were a name only as the party didn’t really expect to get enough votes to have a representative at the European parliament.

As usual that’s the last we will hear until the next election.
Posted by Anji at 7:18 pm 5 comments:

Birds, bees and the rest

In the past I’ve written about the dwindling numbers of sparrows and butterflies on different occasions. I’m pleased to say that I think that I’ve made a difference. When I put out scraps of bread I can sometimes count as many as 20 sparrows as well as blackbirds sharing the crumbs. This afternoon I was watching the action in my deutzia bush outside the kitchen window. It is alive with bees and butterflies, mainly painted ladies but there was also a rather large swallowtail type butterfly which hung around for a while so that I could observe him/her.

So I think that next I would like some more tiny blue butterflies, I haven’t had one of those in my garden for a few years and we seem to be a bit short of Emperor and other dragon flies at the moment. I’ll let you know what happens ..

There were more and more butterflies as the afternoon wore on. Whenever a car or pedestrian passed by the butterflies flew up into the air. I’m sure there were at least 50 on the side of the bush that I could see. Later I was ironing in Dom’s room (nice to have more space – I now have an ‘ironing room’) I heard some juvenile chattering and a blue tit with one of it’s youngsters came in search of food. The parent was very busy picking insects from the branches and feeding them to their chick. It was pretty windy and both of them had quite a job hanging on.

This morning the painted ladies are slowly coming back as the day becomes warmer and they’ve been joined by a couple of red admirals. There is also a rose chafer ‘caressing’ the flowers. I wonder who’ll turn up next?
Posted by Anji at 11:41 am 3 comments: