About that canned meat

Not long ago I had to enable comment moderation because of that kind of comments. It didn’t really have any effect so I switched the word verification on. Something I didn’t want to do as I struggle to read what letters I’m supposed to put in myself.  I realized that I’d missed a blog when I had about 50 sapm comments on one post in a row (I presume it was to make up for the comments it couldn’t leave on the other blogs). Next thing that happened was the unwanted comments came back, because somehow the verification turned off!

For the last couple of days I’ve only had real comments, which has been a pleasure. Unfortunately I don’t get as many comments as I used to. I know I haven’t had much to say recently, but I imagine some readers just can’t stomach jumping through the hoop just to say a few words.

An email gets trashed if it addresses me as Dear one or Dear friend. I don’t read Russian and I don’t take orders from anyone. I’m not afraid of the FBI and I certainly don’t open documents. I don’t gamble, take drugs or want to enlarge something I haven’t got – so there!
Posted by Anji at 4:45 pm 5 comments:

Email ThisBlogThis!Share to TwitterShare to FacebookShare to Pinterest
Labels: comments, emails, I'm too old for this, spam

Was it the 13th yesterday?

Yesterday started well enough. A normal day just like any other - until Rob phoned me mid-morning to say that he’d fallen off his bike and that he was coming home at lunch time. 12 years ago he did the same and broke his elbow which meant 3 months off work.

As Rob was cycling to work a motorist stopped suddenly to avoid a pedestrian and Rob swerved to avoid hitting the car. Unfortunately his heavy rucksack kept going and pulled him over, so that he lost his balance.

I could see which arm he had damaged when I went to pick him up from the bus stop. He hadn’t been to the emergency department at the hospital as he didn’t think it was serious enough. He went to the Doctor later who told him to go to hospital straight away.

It didn’t appear to be too busy in the emergency department as we were checked in and ushered to a waiting room. There were only two people in front of us… The waiting room filled up quite quickly and it was three hours later that we finally got to see a doctor. Rob was examined and X-rayed and it seems that nothing is broken, but as there was so much swelling a fracture could be hidden. He has to go back in 10 days. His arm is now strapped up and he has pretty strong painkillers to take.

We arrived home just after midnight.

He’s well enough to criticize my driving.
Posted by Anji at 3:02 pm 5 comments: 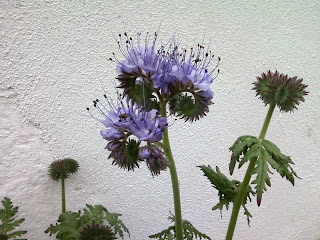 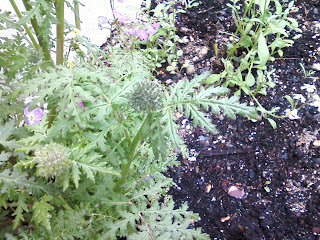 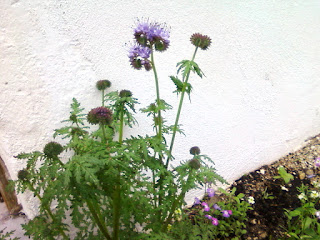 What is this plant called? Do you know of it?

I thought I’d lost it when it shriveled up and died last year. It’s come back and flowering later this year due to the colder weather.
Posted by Anji at 6:23 pm 9 comments:

The other day I was googling “what to serve with pizza” when I came upon a quote from Miss Piggy about using chop sticks. It set me searching and I came upon a brilliant site. All any woman needs to know in order to be belle, chic and je ne sais pas quoi*.

There are her beauty recipes, beauty tips, etiquette, cooking advice, finding eligible men and of course pearls of wisdom. Believe me, you will thank me for showing you the true secrets of femininity.

When you have finished reading it will be time for a teensy workout:

She even got to dance with Rudolph Nureyev.

*Je ne sais pas quoi = I don’t know what, Miss piggy wouldn’t understand because she only speaks two words in French, one of which is “Moi”.
Posted by Anji at 2:32 pm 2 comments:

I had a postcard of The King of Spain, Alfonso XIII, on a train and wanted to find out how old he would have been at the time (14 or 15).  Looking him up on Wikipedia I was scrolling down and noticed a list of ‘Enfants naturels’, in English ’Illigitimate issue'.  One of which was born after his relationship with the English Nanny sent over from England by none other than his mother-in-law, Princess Beatrice, daughter of Queen Victoria. (The English Wikipedia page doesn't tell you all of that!)

Note to mother- in- laws everywhere – careful how you help your married daughters.
Posted by Anji at 11:40 am No comments:

Email ThisBlogThis!Share to TwitterShare to FacebookShare to Pinterest
Labels: history

Happy Blog anniversary to me!

BlogExplosion: Death of a Giant?

Anyone who’s tried to log into Blog Explosion recently will have discovered – nothing, just a 503 message. Not even the forums are functioning now. It seems to have gone down the same road as BlogCrowd, Blogmad and Blog Soldiers.

I joined BE back in 2004/5. Looking back at my older posts I found some good friends there. Then I discovered that there was a backload of blogs waiting to be approved, which I did for two solid years. We managed to get them up to date twice during this period. Due to lack of administration the forums were inundated with all forms of very nasty spam. A dedicated team of members and I spent a lot of time posting to push the spam back; it was the only tool we had. Some people were writing on the forums that they weren’t receiving credits they had paid for. What to do?

In February 2009 we organized the writing of (real) letters to the company which owned BE. This eventually led to a new administrator being appointed. A volunteer who worked all over the site and dealt with support tickets as well as cleaning out the spam from the forums. His access was limited, but he did his best and for a little while everything was going well. Then he disappeared. I’m sure that he was banned from accessing the site for some reason.

A year later we were back to square one and the owners could not be contacted. I discovered that they weren’t paying some of their employees either. At this point some members came forward and said they would be interested in buying BE, but from who? Throughout this period surfing was difficult as the system wasn’t running properly. Someone tried to fix it but afterwards, credits weren’t allocated for surfing, the numbers to click on weren’t always there and I think this was when logging in became very touch and go too.

In May 2010 a few of us got together and set up a new blog exchange: ExposeYourBlog!. However, I was still trying to approve the never ending backlog of blogs and keeping an eye on the forum on BE. As EYB! grew I spent less and less time trying to keep something going on BE.

A lot of our members migrated from BE. Thank you to everyone who supported BE in the past and those who support EYB! today.

Confused? You will be

On Monday my Thursday afternoon lesson came in the afternoon.

On Tuesday it was a holiday so it felt like Sunday.

On Wednesday I went shopping for groceries which I usually do on Tuesdays or Thursdays and my Tuesday afternoon lesson came for her lesson.

Email ThisBlogThis!Share to TwitterShare to FacebookShare to Pinterest
Labels: days of the week, I'm too old for this 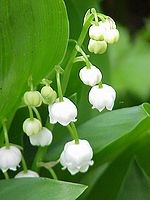 The first of May already and we still have the heating on!  The tradition in France is to offer Lily of the Valley for good luck today.  Rob went out to buy a baguette this morning and came back with a stem of flowers for me.  It's a holiday here, when we first came to France in 1985, even the television channels were off until 8 in the evening.

I hope that these Lily of the Valley bring you luck and happiness.