The weeks have flown by again as I’ve been really busy and a few family issues have been thrown in.

After visiting the Swedish Chef at the beginning of the month, I decided to experiment with drinking three liters of water a day. I’m still in a little pain from the bout of cystitis. All the antibiotics in the world won’t help if you don’t keep your pee as diluted as possible. The last check up I had came back with no bacteria at all. I don’t find it easy to drink large amount of water. Little and often is the secret. I also refill a half liter bottle so that it seems a little less like Mission Impossible. I'm truthfully managing between 2 and 3 liters a day.

Olivier now knows where he will be working and roughly when, but not for a few weeks yet. He’ll be replacing someone on maternity leave so it’s a short contract. At least he will have his foot in the door and will be able to put experience on his CV. By coincidence it is in the same town as the lycée that J-M is teaching in!

Dom phoned during the week, she has now driven in the snow for the first time. No snow here – just cold.

M-I-L is in hospital. She’s very weak. This month she celebrated her 91st birthday! I hope that they let her go home soon, she hates hospitals.
Posted by Anji at 12:13 pm 6 comments:

I remember it was quite misty as we drove off in the early hours of the morning. When we got into town the market traders were setting up and the road was blocked by someone unloading a van. I thought that I was going to give birth there and then in the car!

A couple of hours later, a beautiful baby girl was born and I shed a few tears. I never thought that I would have the privilege of having my own daughter. Today is Dom’s quarter century. The first of many, I hope.

I can’t believe that time has gone so quickly – again!

We had a bit of an adventure last weekend. On Saturday, I was sat at my computer and looked over to the farmyard across the road to see that there was a dog attacking the hens! I went across straight away to see if the farmer was there – he wasn’t (the windows of his house don’t face the yard where the hens roam). So I headed for the piece of land he has behind the town hall. On the way a man in a car stopped and asked if I’d seen a husky dog so I told him yes, the dog was in with the hens. In the meantime, Rob was shouting from the office window to try to distract the dog and saw that the man had difficulty trying to call the dog, the dog ran off down the road.

We saw the farmer on Sunday morning and told him what we had seen. The dog killed 6 hens. Anyway, because of this, I found out what kind of hens they are: Poules de Maron. They are very special hens that lay “golden“eggs 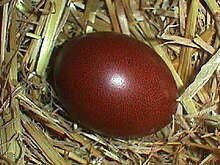 I’ve seen the farmer since then and the dog owner hasn’t been back to apologise.
Posted by Anji at 12:54 pm 5 comments: