Look below at the post “When did the change over happen?”.

Since the beginning of December I thought that I was suffering on and off with a mild case of cystitis. It turns out that my bladder is having spasms. While doing research, I discovered some websites that hinted that this problem could be due to keeping your phone in your pocket. My phone is definitely out of my pocket for the time being. I have tablets to take too, hopefully it will get better soon.

Note to self: Listen when son speaks…
Posted by Anji at 5:36 pm 2 comments:

I went shopping a week or so ago.  It was pretty busy in the supermarket when the alarm started.  A voice came over the loud speaker asking us to leave calmly and quietly.  The message was repeated in English too.  So we all walked to the exit calmly and quietly.  I found somewhere to leave my trolly/cart, that I would remember, but most people were still pushing their shopping towards the exit.

After a few seconds everyone was coming back again.  Then there was an announcement to say that the alert was a computer error.  See how exciting life can be?
Posted by Anji at 5:18 pm 3 comments:

I apologise for bringing up the coming elections again. This time it's good news; Eric Cantona the ex footballer, artist and actor is looking for the 500 letters of support from mayors to allow him to stand for election. He wants to draw attention to the homeless and near homeless that live in the most terrible conditions in our big cities.  I mentioned Emmaüs in a post on my Still Learning blog. Since Emmaüs' founder, Abbé Pierre, died in 2007, the homeless have lacked a high profile champion.  Well if Eric gets onto the lists, he's got my vote!

This is Eric Cantona's ad about poor housing in France.  It is in French, but I think it's understandable, at the ends he asks 'will you take it?'


France has recently celebrated the 600th birthday of St Joan of Arc.  Unfortunately for poor Joan, her reputation is becoming more and more tarnished.

Recently a scolar has decided that Joan was in fact a man. The French soldiers would never have followed a mere peasant girl into battle.  The reason why the French wanted her to be known as a woman was that the English would have been terrified of a woman sent by God to fight for the French.  Was God not supposed to be on the English side? I don't think this theory holds water as the French handed Joan over to the English for execution.  I think that would have blown her cover, if there was one.

We're having an election for a new President later in the year.  There is a lot of fighting, name calling and so on, as usuall.  St Joan has cropped up in the midst of this as she has been venerated by the far right  for many years for booting out the English and leaving France for the French.  Last week president Sarkozy laid flowers in rememberence of Joan and visited where she was born in  Domremy. This has caused feathers to fly as some seem to think that they have exclusive right over the Saint.

Email ThisBlogThis!Share to TwitterShare to FacebookShare to Pinterest
Labels: telephone 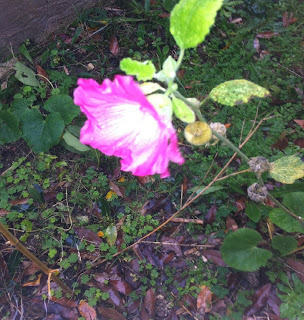 Rob took this picture this afternoon, just before we went for a very windy walk. It's a hollyhock from last summer which is still flowering!  I'm writing this before going to bed, the temperature outside is 18°C = 64.4°F.  Like the title of this post says, it is January 5th.

When did the change over happen?

Olivier hates it when I use words like Gr8 or U R for 'you are' when I send him texts.  He tells me that I must use correct English and no wonder standards of writing are dropping bla, bla, bla.  Over Christmas he advised me not to keep my phone in my jeans pocket.  I answered that I wasn't worried about fertility problems at my time of life.  He then went on about no one knows the long term effects bla, bla, bla.  I'm supposed to be the sensible one, When did we change over rolls?
Posted by Anji at 10:03 pm 8 comments:

Email ThisBlogThis!Share to TwitterShare to FacebookShare to Pinterest
Labels: I'm too old for this, son time, telephone

We had a lovely Christmas and New year.  Nothing exciting just Rob, Dom and J-M, Olivier and I.  It was the first time J-M has been with us for Christmas so I was a little worried about everything turning out well.  My sister in the UK was running around for the same reason.  Her son was bringing his girlfriend with him from the States for Christmas for the first time.  Dom and J-M left last Monday and Olivier came and went as he had to work at KFC.  He was sort of here for new year, but was with his friends. Rob and I watched a film on new years eve.  We stayed up, but fell asleep just before midnight.  We were woken by the famous Can-Can music finishing and the cries of the dancers from the Moulin Rouge (obligatory for new year) on TV.

Olivier came in for feeding and a shower before leaving for Poitiers for exams and KFC.  When he comes home next time he'll be 21!  Where did those years go? The house feels so empty now.
Posted by Anji at 6:18 pm 7 comments: