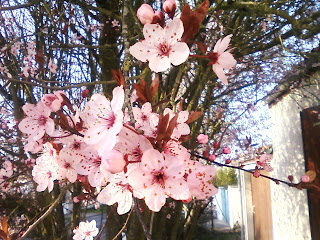 This photo was taken just over a week ago; the blossom has fallen now . For a few days I had a layer of pink petals in the bottom of the bath every evening. Now the tree is covered in leaves.

I took this all by myself with my phone. When I get the hang of putting what I take onto the computer, you’ll get to see more.
Posted by Anji at 3:48 pm 13 comments:

Email ThisBlogThis!Share to TwitterShare to FacebookShare to Pinterest
Labels: flowers, my pictures, seasons

The Queen saw me in my knickers!

I recently left a comment on a post by Connie. It was about school uniforms. Just before I started secondary school at the age of twelve my mum received a list of what I’d need and what I should wear for school. Right down to underwear! I really don’t know how my poor mum afforded all of these new clothes for me – which she had to repeat for my two sisters and brother in later years.

She had to buy the uniform from specially named shops and they were very expensive, but hard wearing. She bought me a ‘lovely’ skirt which was much too long – she said I’d grow into it – I never did grow that tall. Miniskirts were in and we all used to roll up our skirts and hold down the lumpy waistband with a tightly done up belt (non uniform, but well hidden).

In the summer months we were expected to wear straw boaters. They made excellent Frisbees. Can you imagine the glee on the very last day of school as these horrible clothes were consigned to the bin? I clearly remember cutting my school tie up.

For sport in our first year we wore a pair of navy blue knickers (over the regulation navy blue knickers we were already wearing) and a white t shirt. I can assure you that it was very cold in the snow and ice the wrong end of a hockey pitch.

One day the Queen was visiting somewhere locally and we were told that she would pass by the school at a certain time and we would all be out on the pavement to wave to her. This coincided with sport for my class and being the youngest (and shortest)we would be standing at the front. So that is how the Queen saw me in my knickers.
Posted by Anji at 10:46 am 11 comments:

The 22nd February was Olivier’s 20th birthday; he wasn’t going to come home despite it being the holidays and then I got a message to say that he would be home. I saw him long enough to wish him a Happy birthday and then he was out with friends. He did manage to eat one meal with us during the 5 days he was at home.

The blossom is starting to open this week. Unfortunately it has gone very cold again, hopefully not cold enough for a frost.

We used up our 3Gs in just over half of a month. The idea is that we now have a slower internet connection until the 12th when our 3Gs will be renewed. We haven’t noticed a slowing down – not that any slower than slowest could be possible. Our phone line has been now been cut off. I phoned the answer service without thinking. It’s very strange to be told that your phone number does not exist anymore.
Posted by Anji at 3:18 pm 10 comments: