On the whole I think that it’s a good thing that 2010 is on its way out. Looking back over my blog entries, January saw pictures of snow - December too. February is good for birthdays, Olivier and Christian are both February boys. 2010 say the hurricane Xanthia passing through. Unfortunately we drove through the village where there were several deaths quite regularly. It’s still shocking to see the bricked up houses that used to be people’s homes. In March I was still posting about the aftermath of the storm.

Then McAfee did an update which closed down a lot of computers including ours. 2010 wasn’t too cheerful, was it? Nothing interesting to remember in May.

June saw the opening of ExposeYourBlog! A few of us got together disgusted with the way that the owners of BlogExplosion were treating members and volunteers and created our own blog traffic exchange. This is one of the nicest parts of 2010 for me. Being part of building up a new blogging community and making a lot of new blogging friends. June saw celebrations too. 25 years of marriage on the 17th and Rob’s 50th on the 30th.

Only two posts in July!

In September we visited Dom and J-M in their apartment and moved Olivier into his. Christian had also moved out of his Grandma’s and was renting a house with a friend which they eventually bought. I fell over and my knee is still swollen. I celebrated 55. (me!?)

Autumn: Doms’ birthday in November. Mild weather brought, wasps and a hornet as well as the annual hoovering up of spiders, but twice this year.

Time flew by and the year finished with snow and cold weather. We are lucky compared to a lot of places. 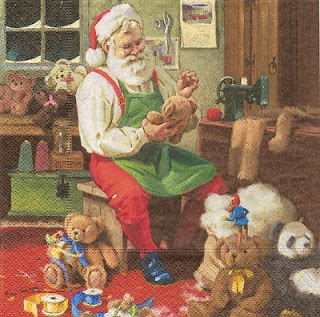 There are a lot of people who this year will not be spending Christmas exactly as planned. Some elderly people will be alone because their families can’t get to pick them up because of the snow. Many people will be sleeping in airports and railway stations. Wherever you are, I hope that you manage to have the best Christmas you can manage.
Posted by Anji at 5:55 pm 10 comments:

Email ThisBlogThis!Share to TwitterShare to FacebookShare to Pinterest
Labels: christmas

We were going to the restaurant in the village and decided to sit at a table on the beach. (The restaurant is a about mile from the beach). There were 4 of us, me Rob and I think Dom and J-M though I couldn’t see them. As we approached the tide started to come in very quickly and was pretty rough. The sea was a beautiful silvery blue with white crests. It was freezing as it landed on the stones of the beach. So we started to move away and came upon Howard Hughes talking to groups of pretty girls about his aeroplanes. He would only talk to pretty girls as long as they didn’t start asking intelligent questions, when one of the girls tried to ask a question he rammed a microphone down her throat. We made for the beach again and other people were hurrying away from the sea, but they came from other times in the past. We knew it was getting colder but I was surprised that I didn’t feel the cold. Then I was in an old fashioned shop selling things (food?) and a woman said I was dishonest. I was very upset about being called dishonest because it wasn’t true, though I don’t think anyone else thought that. I could still see the sea through an arch in the rocks and people leaving.

A picture on Mary-Lou’s blog triggered the dream I think. Here’s more.
Posted by Anji at 4:11 pm 6 comments:

This week is exam week every morning for me. It’s gone very well considering I’ve been getting up at 5.15 in the freezing cold and had lessons and a clinic visit to fit in. Last day tomorrow.

One little incident which almost made me laugh out loud: I was with one of our few male colleagues. He’s a very nice man, a gentleman, he keeps well away from any flirting and teasing which goes on, that kind of gentleman. When he noticed that one of the students had her phone on the chair between her knees; Students aren’t allowed to have their phones on them during an exam, he confiscated it and wrote a report out. He wrote that the student had the “telephone between her legs” – sorry I have a dirty mind, I couldn’t help wondering if it was on vibrate…..
Posted by Anji at 7:03 pm 6 comments:

Email ThisBlogThis!Share to TwitterShare to FacebookShare to Pinterest
Labels: exams, fun and games

They'll take good care of you

Rob has been on a First Aid course this week. If you visit the towers in La Rochelle* and have a heart attack from climbing the hundreds of stairs you can rest assured that Rob and his colleagues will shave your chest and use a defibrillator to shock you back to life. They learnt other useful things too. Rob did his last course 22 years ago when I was pregnant with Dominique (or was it 24 years ago, when I was pregnant with Christian?) and was surprised how things have changed.

From next year in France there will be other changes. No more feeling for a pulse, apparently it’s not much use. Also, no more mouth to mouth, that doesn’t do much either and could be dangerous in this day and age of HIV and other nasties. What’s it like in your country?

*Link to webcam.  The port is empty at the moment because it is being cleaned.
Posted by Anji at 2:55 pm 11 comments:

I’ve had a bit of a strange day today. This morning I was supervising an exam at the school of commerce (yes, it’s that season again). I had to get up early and leave in the dark, in the pouring rain to catch the bus. Then wait in the cold waiting room for 20 minutes for the next bus. The waiting room isn’t heated in order to stop homeless people camping there for the day. When I finally arrived, the building has changed and the reception area split up into three different desks. Fortunately the exam department is in the same place.

There were 4 of us looking after about 60 students (we thought we were having 80). Most of the students this morning were Chinese and studying tourism in English so their French is not good. I gave out instructions in two languages. Nothing was straight forward at all. Then the wait for buses and home again. Next week I could be working there for 4 mornings. When the weather is like it is at the moment I’d rather work at home.

This afternoon I’ve been at the mercy of AOL – again. Perhaps there are so few of us left in France on AOL we’ve all been put onto the same decrepit server.

One thing I did manage to do this weekend was put up the Christmas tree and Rob to put out the outside decorations. I’m looking forward to Christmas but I haven’t got into the spirit of Christmas just yet.
Posted by Anji at 7:08 pm 4 comments:

Another week skids by on the ice rink of time

After getting wet and frozen on a visit to the next town for an auction. last weekend was spent in the company of Dom and J-M. Dom has decided that she wants to study more about artificial intelligence – does the name Susan Calvin ring a bell?

On Wednesday I did something really stupid. I couldn’t get online. I was really pulling my hair out. Fortunately Rob had a half day and when he got home and couldn’t get online either. He telephoned one of his colleagues who is geeky. He told Rob to try pulling out the plug and putting it back in again. It worked – why didn’t I think of that? We’re still suffering from very poor internet connection, nothing to do with that though

Yesterday was the day that we woke up to snow. No school for the children and no buses. It was nice to walk through the village and, because of the snow, to see everyone enjoying themselves. It started to thaw out pretty quickly and now we have nasty frozen, half melted snow.
Posted by Anji at 9:28 pm 4 comments:

Well, it is unusual for us. 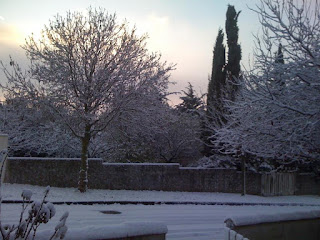 This was the view from the kitchen window this morning. 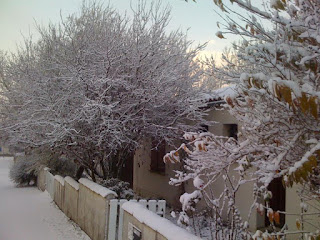 Rob didn’t go into work, too slippery for a bike and the buses weren’t running. This afternoon he’s ‘working from home’ busy with the timetable for work.
Posted by Anji at 3:56 pm 9 comments: