Yesterday we drove to Poitiers to collect Dom and all of her belongings. She’s home for the summer! It poured with rain, all the way there and most of the way back. She said it was a pity as we only ever saw her room on a dull, wet day. I thought the same. She came first in her exams. Isn’t she a clever girl!!

I’ve been supervising exams again and I arrived late for work this morning. The buses were on strike so I walked most of the way. Some of the way back was walked in the rain. At least it was the last morning.

After all the travelling yesterday and all the walking today I should sleep well tonight.
Posted by Anji at 3:55 pm 5 comments:

I'm worth more than I thought:

Email ThisBlogThis!Share to TwitterShare to FacebookShare to Pinterest
Labels: blogging

Another week passes by and we’re almost at the end of May. Looking at the weather over the past couple of days you wouldn’t think so, high winds and storms. I was supervising exams every morning last week which meant that I wasn’t getting home until early afternoon and then I was out giving lessons, not to mention the postcards. Rob and I are probably going to an auction in another town at the beginning of June. We’ll make a whole day of it which will be nice as we haven’t really been anywhere for a long time.

On Wednesday we have to collect Dom from Poitiers, she had 16 in her exams but I’m not sure what it’s supposed to mean. I’ve emailed her so if she replies before I post this I can give out the information.

Olivier had a bottle of Actimel in his room, shook it up, took the lid off, put it down, forgot he had already opened it and shook it again; it went everywhere! His room smelt of pineapple yoghurt for a while.

A car company in Columbus Ohio wants to sell me a Cadillac – I should be so lucky.
Posted by Anji at 3:17 pm 3 comments:

Non waving ovens, kittens and blog birthday
I missed my 4th blog birthday. Perhaps it’s a good thing, it means that I have a real life to get on with too. I’ve written 1366 posts on this blog since I started it and 36,088 visitors have passed this way. I’ve made lots of friends from all over the world and learnt a little bit about a lot of things. Thank you.

My Micro wave oven has stopped waving. It’s quite a shock, I can tell you, when you think you’re going to have hot cooked pasta and you finish with a bowl of cold water with bits of still dry pasta lying in the bottom.

I’m not really an ’Aaaah pictures of kittens’ person but you must go and visit Mary Lou and see her little bundle of fluff. Makes me feel broody – that can’t be right…
Posted by Anji at 2:03 pm 10 comments:

Around and about..
I seem to get busier and busier, after the auctions there has been a lot of sorting out and filing away of cards to do. It’s also exam time again so I’ve been doing that and have exams every morning next week as well as some lessons. Dom happened to mention that her exams went okay; I presume that is a good sign because she sets herself high standards. Rob got a quick call from Christian one morning, he was off the Canary Isles for a week.

The weather is really awful, quite cold and wet and windy. We were really spoilt in April and are paying for it now! Today is a holiday so Olivier’s fast asleep. I’ll wake him to see if he wants to eat lunch. It doesn’t seem that long since my mum was doing the same for me.

I now know what Madame Sarkozy looks like. She’s a lot prettier that Bernadette Chirac. Like a lot of politicians wives, her marriage went through a rough patch a couple of years ago I haven’t managed to find any decent photos, but I’m sure there will be plenty to choose from very soon.
Posted by Anji at 1:27 pm 4 comments:

Nothing to wear
As he didn’t have any lessons between 11 and 2.30 Olivier came home for lunch. All he did the whole time was moan about how he hasn’t got any decent clothes (he was wearing his levis). He’s fed up with being poor and sometimes he’s ashamed to go out, on and on and on….

If any one has space for providing a refuge for me, about two years should do it, while he grows up, I would be grateful.
Posted by Anji at 3:44 pm 6 comments:

Email ThisBlogThis!Share to TwitterShare to FacebookShare to Pinterest
Labels: clothes, family life, grrr, I'm too old for this

Culture and history
As our post office is closed for refurbishment I have to go to the next village to collect our post (we have a box) at the moment and post any postcards we’ve sold. I always park the car across the village and walk through the lovely park. The horse Chestnuts are in flower at the moment and it smelt wonderful this morning as the grass was being cut. In the newspaper this morning was an article about an exhibition of painting by a local artist, so as the town hall is by the park, I went to have a look. There were only two paintings which I liked and the rest were a little bit messy for my taste. That’s my dose of culture for the day.

I discovered why the poster I wrote about fetched so much. The lady in the poster is Sarah Bernhardt but the advertisers hadn’t asked her permission. She was really cross about it and took them to court so the posters were taken down and probably a lot of them destroyed. Now you know why it was so expensive.

Absinthe was banned and I have tasted it. It’s reputed to rot the brain. That could explain a lot…
Posted by Anji at 2:36 pm 4 comments:

Email ThisBlogThis!Share to TwitterShare to FacebookShare to Pinterest
Labels: names

An afternoon at the auction
Yesterday was auction day. As well as postcards, there were binoculars and posters. This is the cover of the poster catalogue. The Terminus poster was magnificent, the figures were life-size and it fetched about $2000! We got most of what we bid for, so now I have plenty of very good stock for my business.
(click on it to see a larger version)
Posted by Anji at 3:06 pm 3 comments:

Email ThisBlogThis!Share to TwitterShare to FacebookShare to Pinterest
Labels: auctions, postcards
Voting part II
We had to vote early this week too, Rob is working again. Until the debate on TV in the middle of the week I didn’t know who to vote for, though I don’t like Madame Royale much for personal reasons. We will see what happens next…
Posted by Anji at 10:25 am No comments:

Email ThisBlogThis!Share to TwitterShare to FacebookShare to Pinterest
Labels: voting
New Addition
I've added a new blog to my blogroll which I know that regular readers will appreciate. There is a lovely story about the Breakfast Fairy which you must read. The Ripple Effect - Make a Difference. Start to Ripple.
Posted by Anji at 10:17 am No comments: 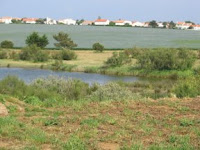 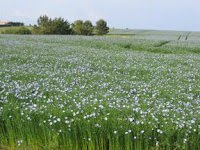 Linseed
In the early spring I noticed that the shoots growing in one of the fields looked familiar, flax (or linseed). I was really pleased it was blue, I’d seen fields of white in England. It looks as if the sky has fallen. When Rob took these photos it was just past its best as the wind had picked up. Yesterday it rained and the flowers have nearly all gone
Posted by Anji at 5:01 pm 4 comments: 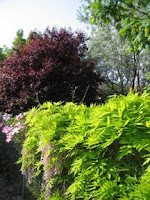 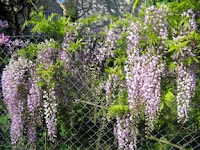 May
A few flowers for the month of may. If only I could get he rest of the garden to grow like this.
Posted by Anji at 4:54 pm No comments: