Our beloved HP PSC 2350 died on Wednesday.  It was with us for over eight years and only started causing problems since the New year.

I installed a brand new HP deskjet 1510 yesterday evening, all by myself, except I couldn’t work out where the downloads were disappearing to.  Rob showed me, I must look and see how many other lost downloads are lurking there since I had this computer in 2011.

The new machine scans really quickly which is just what I need for eBay.  I’ve also written to my Mum and Olivier to check how it prints and that is fine too.  I’m so glad I haven’t had to learn how to do things differently, it’s the same and in the places where it is different, it’s easier. 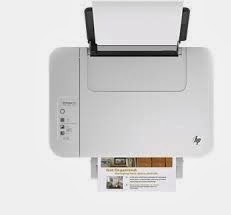 Image taken from the HP site
Posted by Anji at 2:19 pm 3 comments:

Email ThisBlogThis!Share to TwitterShare to FacebookShare to Pinterest
Labels: I'm too old for this, printing and scanning

This is how the deed is done

It looks like the French government is looking into banning images of women that have been airbrushed to make them look “perfect”.  There will also be investigations into the thin-ness of models on the cat walk.

The other day I was looking at some magazines on display at the newsagents.  One of them caught my eye and I was reading the titles trying to find out what was wrong with the poor woman on the cover.  Then I realized that she was modeling clothes that were to be featured in the magazine. 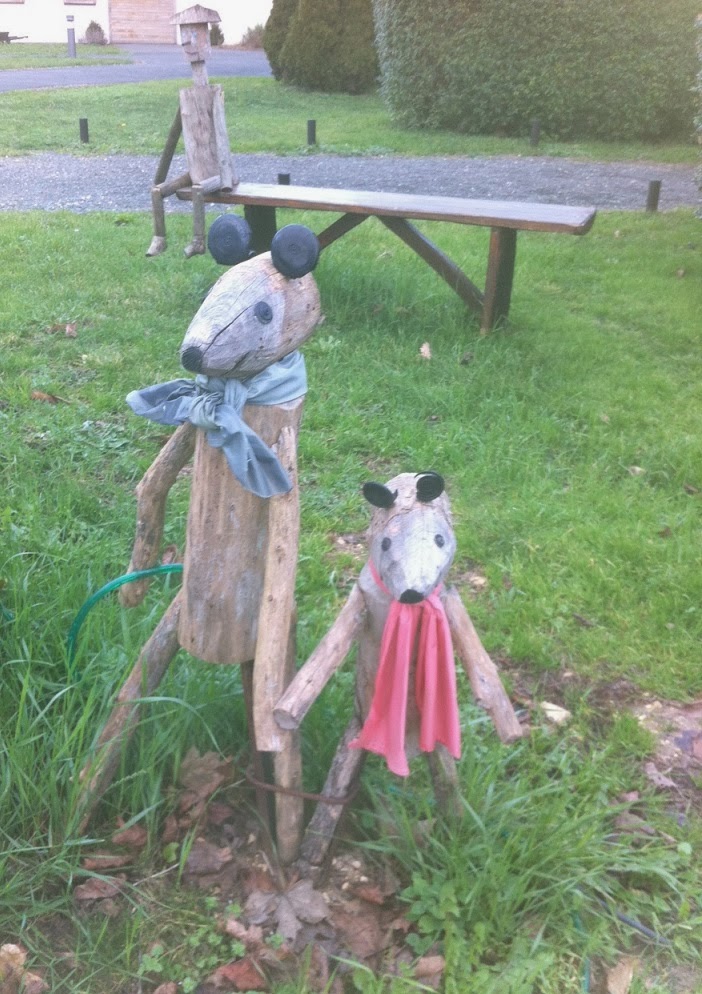 …that make life enjoyable.  We met these two on a walk, they were a part of the Christmas decorations in the next village.  Pity we couldn’t wait around to see them lit up.  Is that the Robot from ‘The Wizard of Oz’ in the background?

This weekend has been all about communication.  I’ve had contact with all of my children.  Dom is still enjoying clement weather in Glasgow.  She’s created a program from scratch to deal with statistics and it works.  She’s never done anything like that before so she’s very proud of herself.  She’s enjoying exploring the shops, art galleries and whatever else Glasgow has to offer.
(Caroline: have you got any of your work exhibited in Glasgow?)

I was very surprised to have a phone call from Olivier.  All is going well for him.  He did come home last weekend so I knew that he hadn’t starved to death. He didn’t bring any dirty washing with him – yes you did read that right.

I phoned MIL and we spoke for almost an hour.  We don’t always have so much to say, but for some reason today we talked about lots of things
Posted by Anji at 5:40 pm 3 comments: 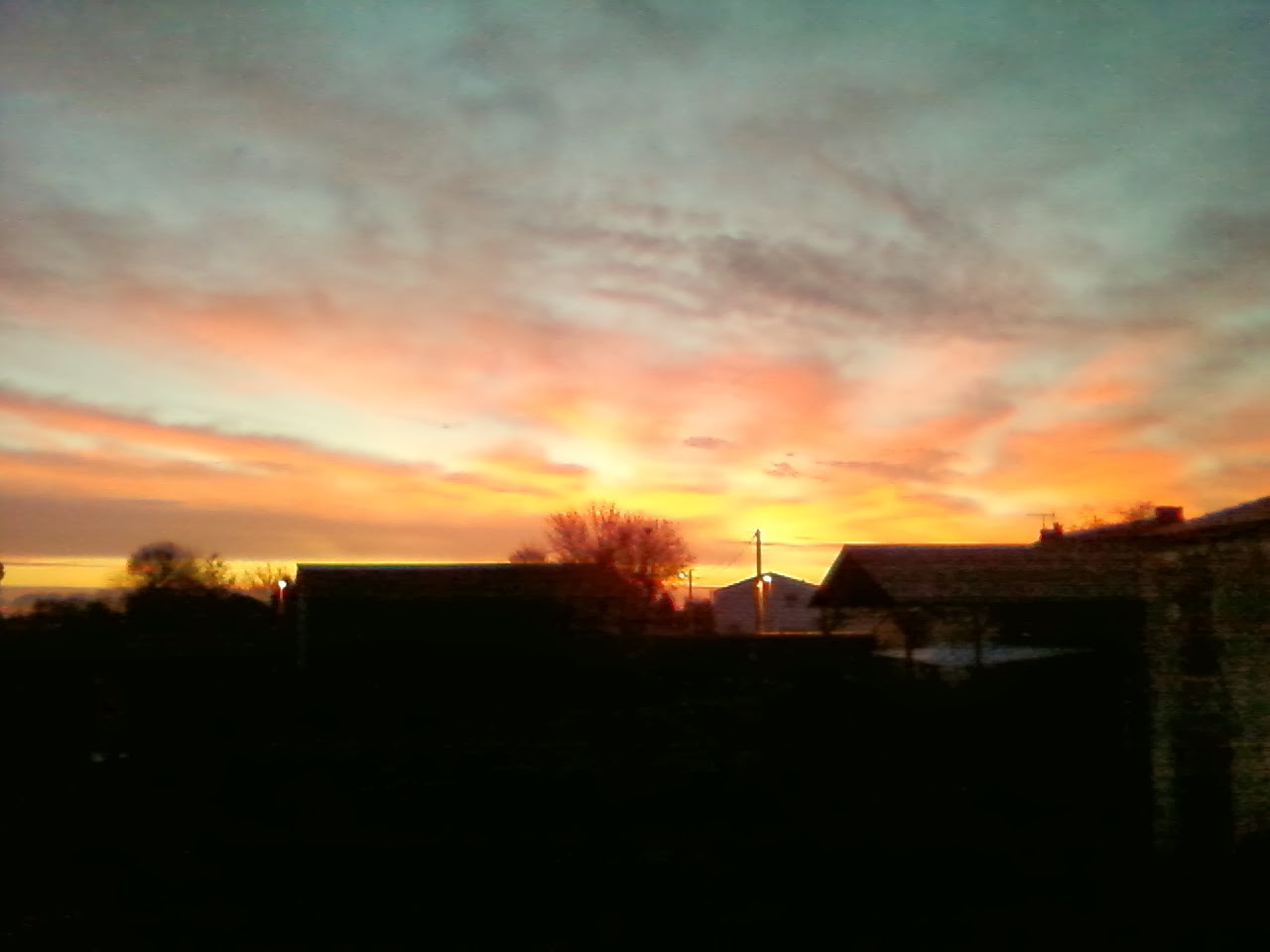 I cleared away the Christmas decorations this morning. Always a little bit of a sad task for me. Now it’s time to take the New Year by the horns and look forward to a great year.
Posted by Anji at 5:30 pm 4 comments:

A year ago I wrote:

“I wonder how many people like me have decided to lose some weight this year. Millions, judging by all of the advice that is cluttering up my email box. I’ve read a few (100 or so) ideas and surprise, surprise, I already carry out a lot of them. I drink water, don’t take sugar in tea or coffee, eat breakfast, eat plenty of fibre, don’t snack between meals, dessert at lunch time is always fruit and so on. I know what my problem is – portion size. That’s another resolution for the list, reduce portion size.

One useful tip I did pick up: Just aim for a 5% weight loss and then take it from there. A lot of health websites tell you to aim for 10 %. 5% seems more obtainable to me.

I’ve also decided to exercise for at least 10 minutes 3 times a week (as well as the normal walking I do). I accidently discovered something to help. Just now, I thought I’d start off with 5 minutes to music. I put on Boz Scaggs; an old friend of mine for exercising to. 6 minutes passed without any effort at all! I hadn’t realized how important a good tune was to get me moving.

I’m also aiming for more blogging. I’ve been rather slack over the past year. I’m also going to try to make my posts more interesting. While I’m at the keyboard I need to write more fiction and poetry. Hopefully I should have slimmer fingers at least from all of the typing.”

Well – how did you get on Anji?

Weight: I’m the same weight as I was at the beginning of last year

Exercise: flew out of the window that one did. I’ve started again and Rob and I have decided to find the time walk more…

Blogging: Unfortunately there were even fewer posts on this blog last year. 2004 was my most prolific year.

The nice thing about resolutions for the New Year is that you can start afresh every 12 months – how’s that for optimism?
Posted by Anji at 4:30 pm 4 comments:

Get out the squeegees!

I knew what a squeegee was called in French but not in English.

When we took Olivier to his apartment for the first time there was a lot of form filling and an inventory to do with his landlord. Olivier has a brand new shower big enough for 3 people at least. The door is clear glass. Needless to say, the landlord wants to look after his assets, so he has provided a squeegee.

This inspired me to buy one for our shower and now every morning I have a quick squeege around before I get out of the shower. It takes less than a minute.

I’m now prepared to use it to clean the windows when the weather permits. I had a look on YouTube to discover the best technique. It was interesting to see that the Anglo-Saxon videos on the subjects lasted a lot longer than the French ones. Actions speak louder than words; you don’t even need to understand French and it lasts just over 2 minutes!

Gosh, it’s over a month since I’ve written anything here. As I said in my last post, I’ve been really busy. M-I-L was let out of hospital after about a week. She enjoyed her Christmas and New Year. It gave her a change from her usual routine.

We had a very quiet Christmas and New Year. Olivier was the only one with us this year. We drove him to his new apartment on New Year’s Day as he was starting work on 2nd January. His apartment is amazing. In an old building which has recently been renovated. He has a fantastic kitchen area and a washing machine to die for! It’s so much nicer than the gloomy place he had in Bordeaux. He lives about two and a half hours drive from here. Our journey back was awful, lots of rain and wind and it was dark. Fortunately there wasn’t much else on the road and no trucks as it was a holiday. We stopped at a McDonald’s for something to eat and had the place to ourselves, the roads were so quiet. Unfortunately the music was turned up rather loud which spoilt the effect.

Olivier now knows how to tie a tie.

Dom is now in Glasgow for a month – at this time of year! She arrived yesterday and e-mailed to say that it was wet and windy (surprise, surprise!) and that her room is cosy. I had a look at the part of the University where she will be working using Google Earth. It looks very impressive.

Thank you to everyone who continued to visit despite not having anything to read. I couldn’t even face looking at my blog list at one point so I trimmed it down from 100 to 85 blogs. I will try to make an effort to start visiting again.