Time for a general news report. For the second time in a year Rob and I have found a car in the stream which runs alongside the marsh. This one was right on its side. *I looked around a bit, no sign of breaks being jammed on, looks almost as if they did it on purpose. Perhaps a romantic couple who thought they’d park on the side of the road – and fell into the ditch?

*We’ve got Numb3rs back on French TV so I’m being extra observant at the moment.

The big news in our region is that one of the inmates of the revived Big Brother on French TV is a very pretty ex police woman from Bordeaux who doesn’t mind pole dancing and stripping on the side. The worse part is she quit the police to go into the gold fish bowl and has broken a 5 year contract. I'm not the only one to blog about it, one of the young men she arrested recently was first.
Posted by Anji at 1:46 pm 5 comments:

Today is the day where we learn a little Russian, to go with the soup. Contrary to popular opinion Cyn does not mean sin. ‘C’ in Russian is usually pronounced ‘S’, ‘y’ sounds like ‘oo’ and what looks like an ‘n’ is prounced ‘p’; so if you put that together you get Soup. Surprise, surprise!

As you’ve all been such good students, here is your reward.
Posted by Anji at 3:52 pm 8 comments:

Remember you heard it here first. Bruce Willis is in Paris at the moment, he was interviewed on the first channel yesterday evening. Rumour has it he might be looking for a 'pied à terre '.

What you might not know is that when he’s in La Rochelle he takes the number 36 bus, it’s a pity his track suit top and bottom never match…..
Posted by Anji at 1:48 pm 7 comments: 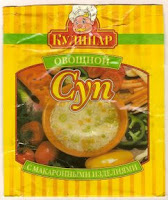 This is what I tried for lunch today – Russian soup. I managed to translate how long to cook it for, but Dom helped me with the rest. Like most dehydrated soups it was very salty. I wouldn’t buy it again, even if I could.
Posted by Anji at 2:53 pm 5 comments:

A day at the auction

Saturday found us in the town of Chatellerault We got up at three in the morning to take the early train. As well as playing the tourist we were going to an auction in the afternoon. Most of the morning was spent at the viewing. We got most of what we bid for, although there was one beautiful album which went above our means.

On the way out there was a bit of upset because some one had found a dog locked in a car. It was very hot and the owner had closed all of the windows. This happened in the past when I worked in England and the owner of a local pub, who was a dog lover, smashed the windscreen of the car to get the dog out. Fortunately the owner arrived on the scene and insisted she hadn’t been gone for long, that she looked after her dog and loved him. There was a bit of a row and Rob stepped in to smooth things over assuring the owner that people were only concerned for the health of the dog and not criticising her as such. He was a beautiful little dog, one of those breeds with too much skin, he just looked at everyone as if to say “Is all this fuss over little me?”
I was shattered when we got in at around 11. I had the best sleep I’ve had for ages.
Posted by Anji at 9:15 am No comments:

A morning with my son

This morning it was Olivier’s turn to have a trip into town with me. I’d ordered a new micro-wave, at last, from the catalogue as it was 25% off. I needed him to carry it for me.

Until recently we collected our orders from the wine shop with the lady who had trouble balancing on her high heeled shoes (drunk). The advantage was that I could park right outside which would have been great for collecting the micro-wave. However, it was not to be and I had to collect the order from town. In order to park 10 minutes walk from the shop we had to leave early to get a parking place. Olivier was up and cheerful, much to my surprise and we went into town and parked. The shop wasn’t open , nor the shops he wanted to look into so we went to the port to find Rob who gave us the money for a coffee (I never have any change on me). We collected the micro-wave which was more awkward than heavy and Olivier decided he’d prefer a sandwich from the supermarket, so we went there, then we collected the post and went to the other super market to buy bread (don’t ask). He then had to mend a puncture before he could use his bike to get to weightlifting this evening. (If I have to pay for the muscles I might as well make use of them) This is the first real day of his summer holidays. I’m pleased it was a busy one for him.

He’s scraped through this year and will advance. For a while we thought he would have to ‘redouble” (do the year again);
Posted by Anji at 4:42 pm 3 comments:

Can you smell it too?

I went and collected my free perfume sample yesterday afternoon. It was from a posh, expensive shop. I was greeted by an enthusiastic salesgirl, sprayed with perfume and given a perfume sample though they’d run out of the offer samples. Then they opened the door to let me out. I felt like I’d been whizzed round in whisker or something. The perfume they sprayed on me, mandarin and bergamot, was nicer than the sample I’d gone in for.

I can still smell the perfume I put on this morning; I’m getting a bit of a headache because of it.
Posted by Anji at 4:41 pm 2 comments:

Email ThisBlogThis!Share to TwitterShare to FacebookShare to Pinterest
Labels: perfume

Dom and I wet to the mediatec (library) on Friday afternoon. I rejoined and we looked at books and borrowed some. I thought I’d give John Updike a try in French. I don’t know why I haven’t got into the habit of going there. On the first floor you can sit in comfortable chairs in front of enormous windows overlooking the port (and pretend to read?).

The fair is in town so we picked out way back through the booths and rides which were being set up (it really puts you off, seeing them being constructed) and went for a coffee at our favourite ‘belle epoch’ café.

When we were crossing the square I spotted three girls dressed in white with wings (angels)! They were promoting perfume and gave us scented fluffy white feathers and a card. When I got home I read the card and it’s got a number on to phone to see where to go to get my free samples!

It’s nice going out with my grown up daughter.
Posted by Anji at 12:14 pm 2 comments: