There's a spider in the old barn

This morning I went into the garage to put the recycling bin away. The garage is an outbuilding, a barn, well over 100 years old made of local stone. I find it fascinating. Unfortunately when I moved the ordinary bin out of the way there was a huge, giant, enormous, big, enormous (did I say enormous?), big spider on the lid. I think that it was a Cardinal spider.

The French Wikipedia is more dramatic as it gives the maximum length of the spider, including legs, as up to 13 cm which is just over 5 inches! The English Wiki talks of body length only. Mine wasn’t that big. It’s fast too; speeds recorded up to 3.5 Km/h = 2.17 mph. As it happens it is harmless to humans (excepting heart attack when you see one up close).

In bad weather I hang the washing out in the garage – I really hope that the spider does not like fabric conditioner. This is what I wrote about the barn a few years ago: The barn

The tunnels mentioned in the story were built many hundreds of years ago and were a way of moving protestants to safety during the many religious conflicts.
Posted by Anji at 10:02 am 2 comments:

I have finally published a book on Kindle!! It’s taken quite a while and challenged my knowledge of Word, but I got there in the end As from today you can buy Angie Brynner & Company from Amazon for your Kindle. Did you know that if you haven’t got a Kindle reader you can download an App for smartphones, or you can read using your tablet or computer?
Posted by Anji at 1:32 pm 6 comments:

Unfortunately I found this lying on the grass this morning: 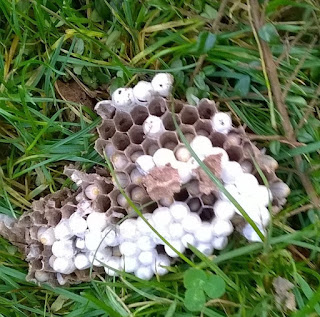 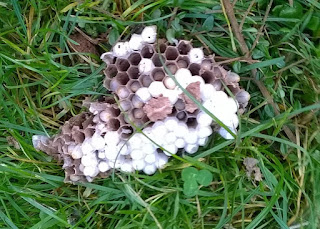 I don't think that the cats would have done this.  I haven't seen any cats in the garden since the nest appeared as it's close to where they come in and out.  Looking online I have discovered that badgers enjoy a bit on honey and sometimes foxes.  I don't think that there are many foxes around here and badgers?  I've never heard talk of them.  I'll have to grab a passing farmer and ask them if there are badgers locally.

The gate into the garden is locked at night so I don't think a human would have done this.  Good news is that the bees are still going to and fro so there is some of the hidden nest left.
Posted by Anji at 12:04 pm No comments:

This last week has been interesting as far as nature is concerned. We’ve had a nest of red-tailed bumblebees in the garden in a wall behind the hedge this year. They are very beautiful and it’s been fascinating to see them coming and going. Rob and I have left them alone, especially after he was stung when he was mowing the lawn near to their nest. Can you imagine how the noise and vibration would seem to them?

This week he was stung again and his leg was quite swollen. I checked up online and that can happen and it’s ok. As it happens they are bees that do not die, they can use their stings over and over. I found this wonderful website all about bees. When the weather gets cool enough the male bee population will die, the old queen will die and the young queens have all ready flown away to make ready for their own colonies next year. I will be sad to see them disappear and feel privileged that they chose our garden.

A couple of mornings ago I found a European House Centipede on a kitchen work surface. These are insects I have a lot of time for as they are excellent hunters and rid the house of just about every insect you can think of. I find a clear Tupperware container and pop it over them and then carefully slide a thin piece of stout card underneath (careful not to trap their legs) and let them free outside.

The next one appeared when I was sat on the toilet and of course feet look like good shelter* on their level. I caught up with this one in the bedroom and popped him outside. We’ve had a very mild autumn so far and it looks as if it is going to end soon if I’m finding them indoors. If you do find one or two it’s an indication that you haven’t got any large infestations of other creepy crawlies in your home. If there is nothing for them to hunt they leave.

*in 1902 an entomologist observed that they frightened the ladies when they headed for the shelter of their skirts
Posted by Anji at 10:06 am 3 comments: