I left the soup in the fridge so that I could skim off the fat easily. Then I used a colander to drain the soup from the bits of chicken and vegetable (yes, I remembered to use a second saucepan so that I didn’t throw the stock down the drain). The chicken came away from the bones very easily. I whisked all the bits of veggies and chicken together in a blender and added the mixture to the stock. It was really good. Not as salty as I was expecting as I’m used to ready made soup. I have enough for today’s lunch and tomorrow. Rob will be home for lunch then and be able to have some too. 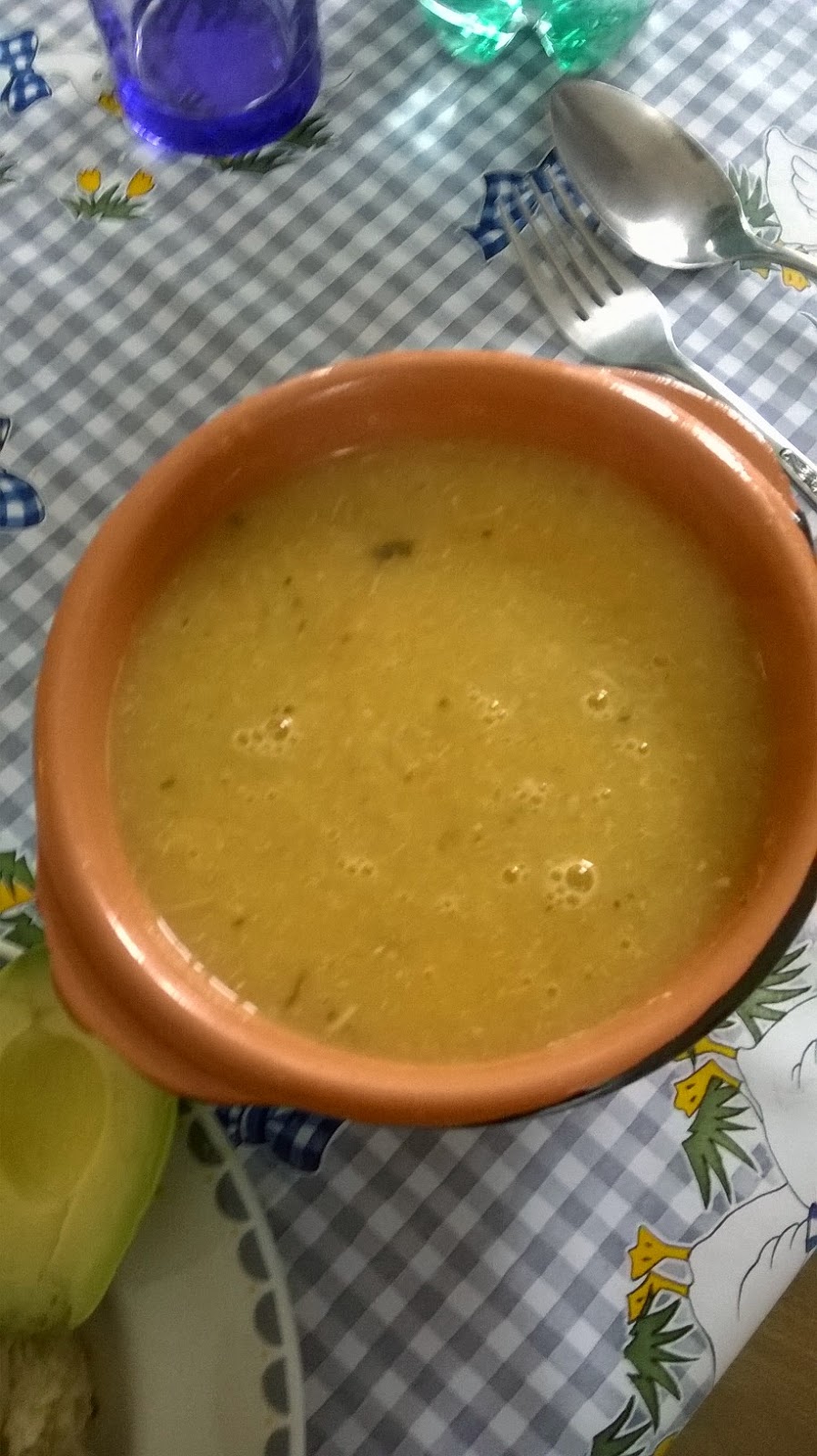 It’s not something that I would make if I had people round to eat, there is a lot of messy fiddling about in the middle stage. It’s a good way of using every tiny scrap of leftover chicken.
Posted by Anji at 11:51 am 2 comments: 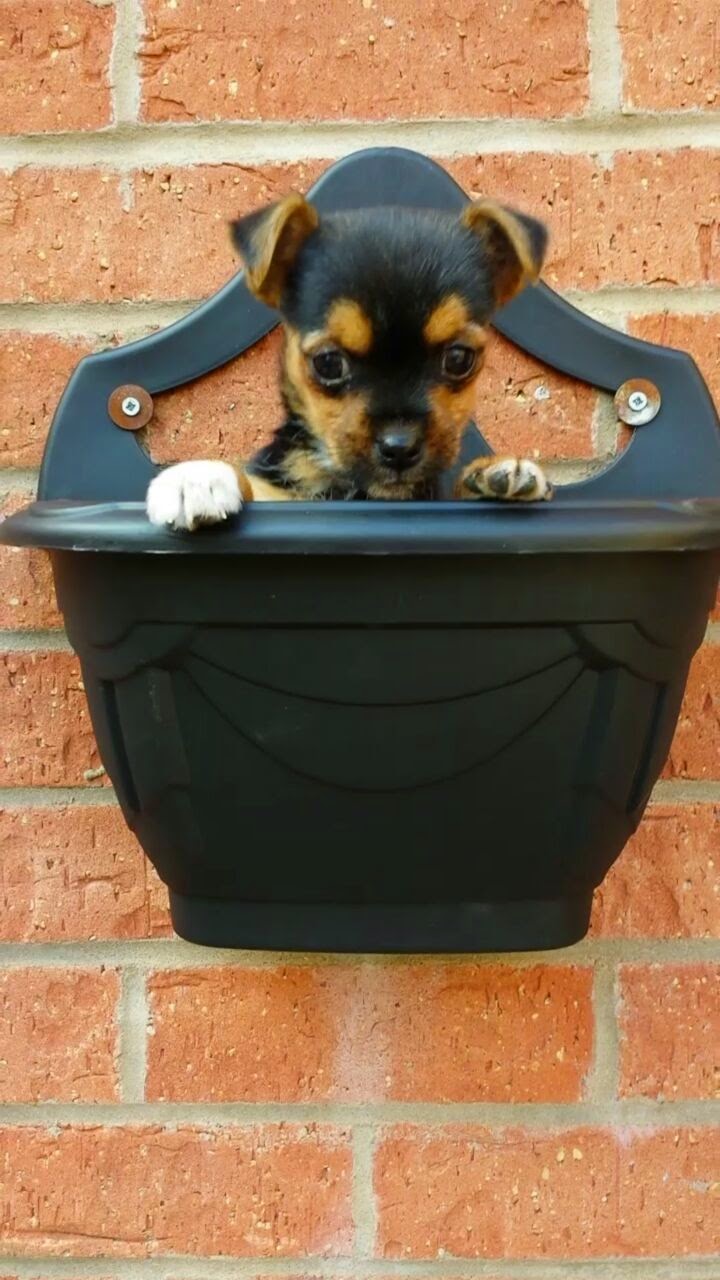 Christian and J have a new puppy. Isn’t he gorgeous? He’s a Jack Chi and very small. So now I have two grandchildren. We won’t be meeting him until the end of May.
Posted by Anji at 2:27 pm 4 comments:

Today I decided to try making chicken soup. It’s supposed to be really good for you. I looked up several recipes online and as there were many differences in the vegetables to include I put what I had. I remembered I had parsley in the garden so I added that too. The smell takes me back to my Granny’s stew. I’ll have to get some pearl barley for next time. 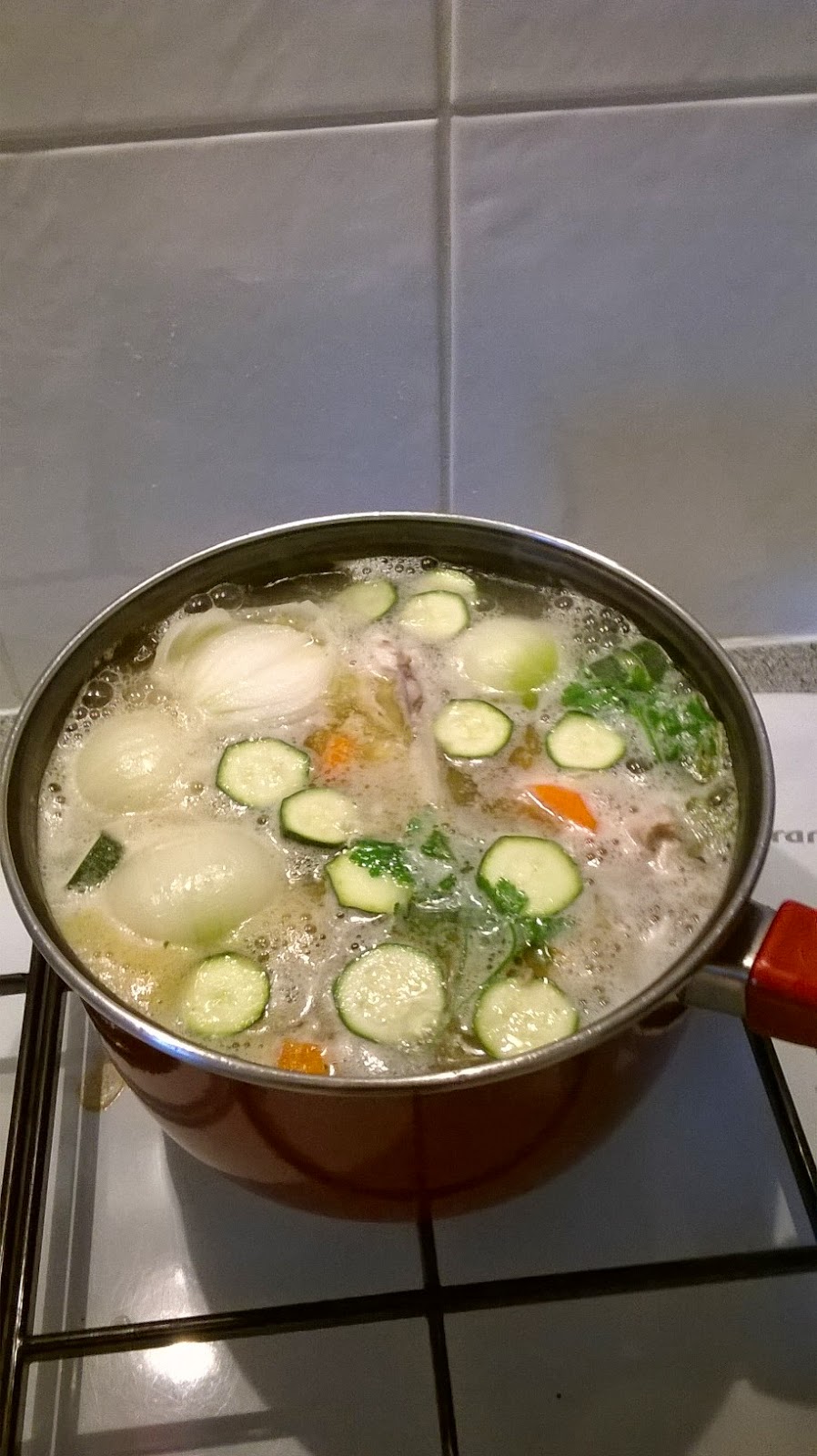 Back in February I wrote about seeing an incredible sunset in the UK. It was on 7th February, I remember that because it was Christian’s birthday. Well a couple of weeks ago, exactly a month later on 7th March we were collecting a pizza one evening and again, there was an incredible sunset. The sky was on fire. I got my phone out and managed to get a couple of pics. The car one is wobbly because the road is so bumpy. 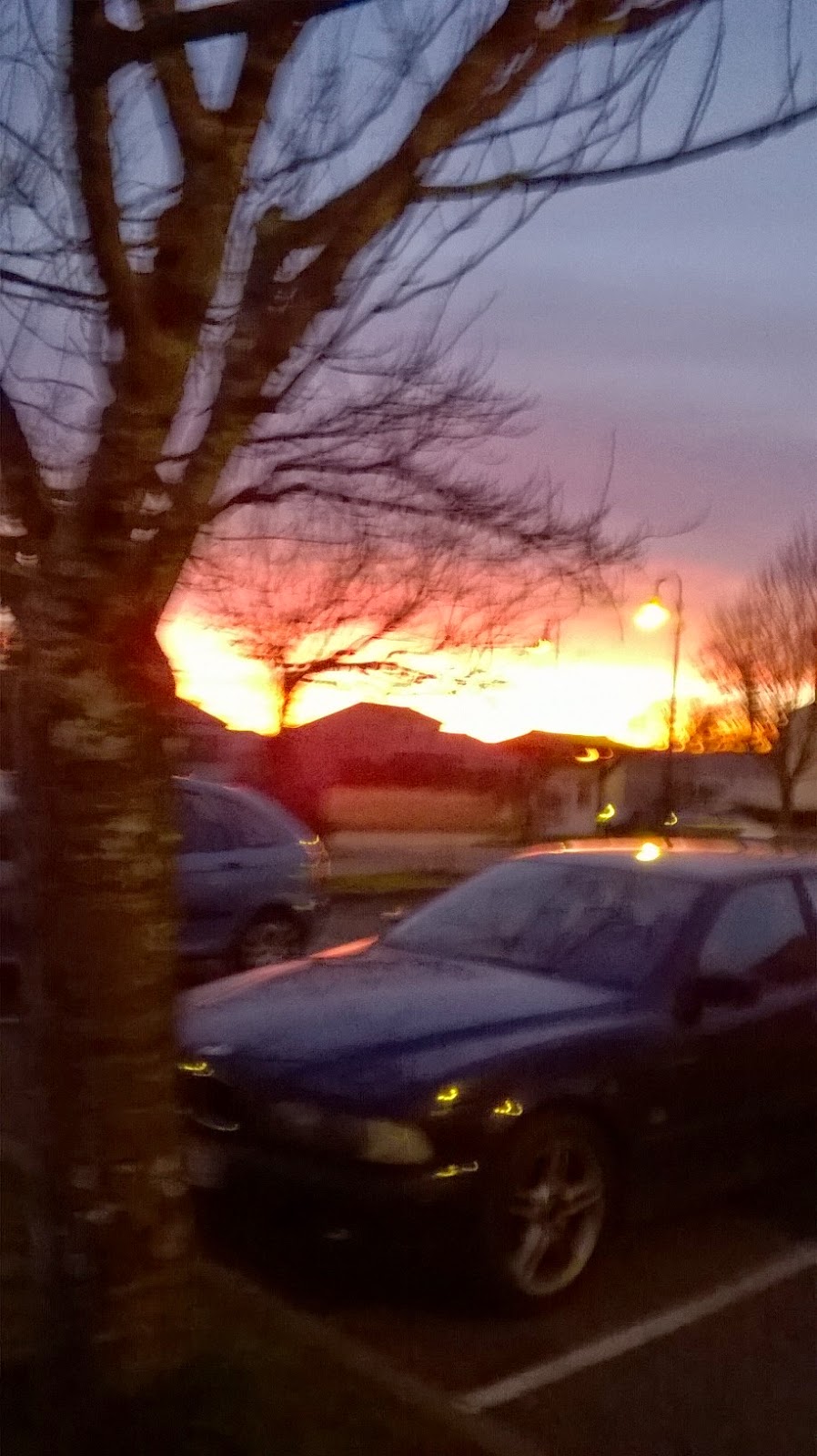 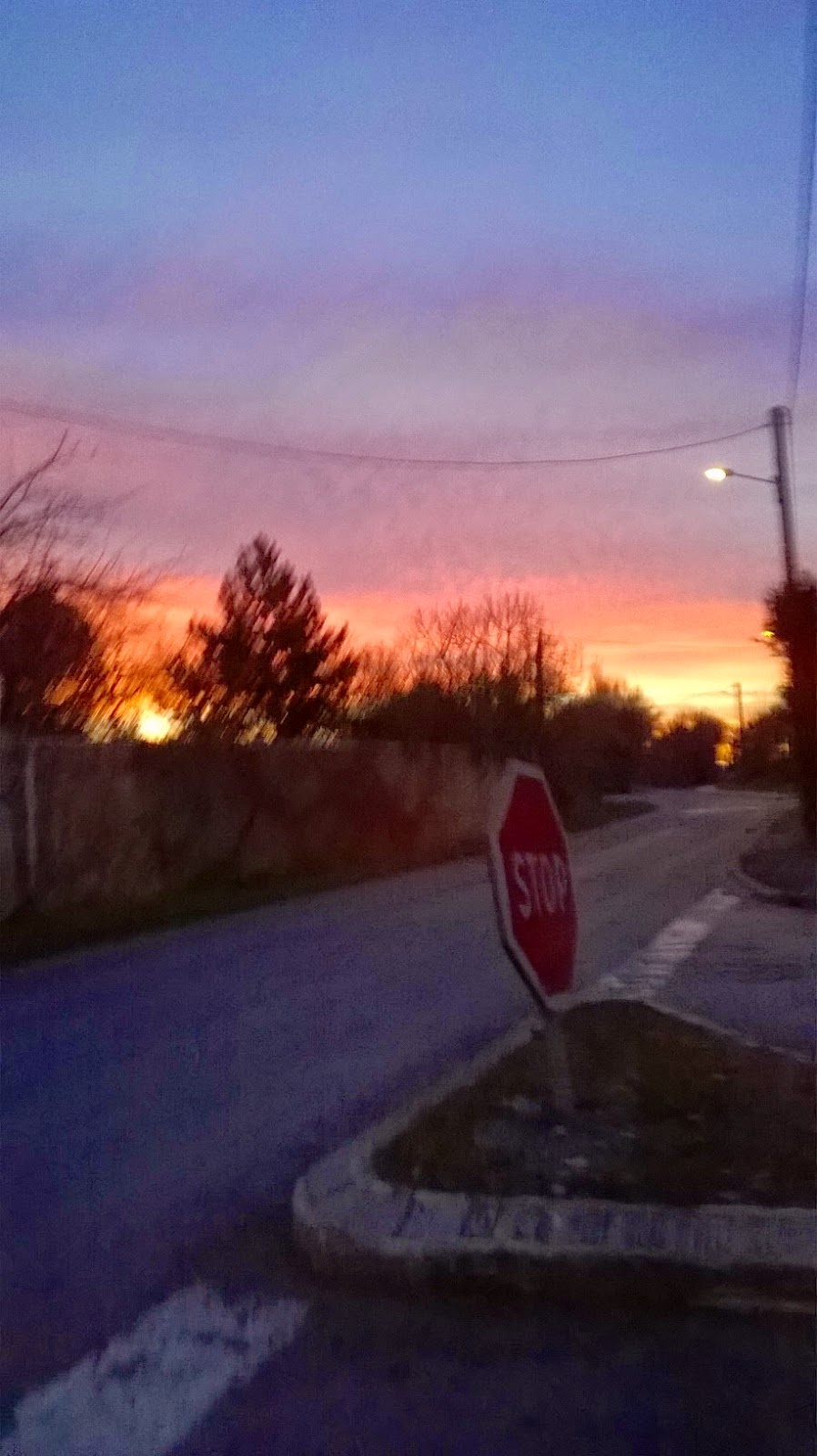 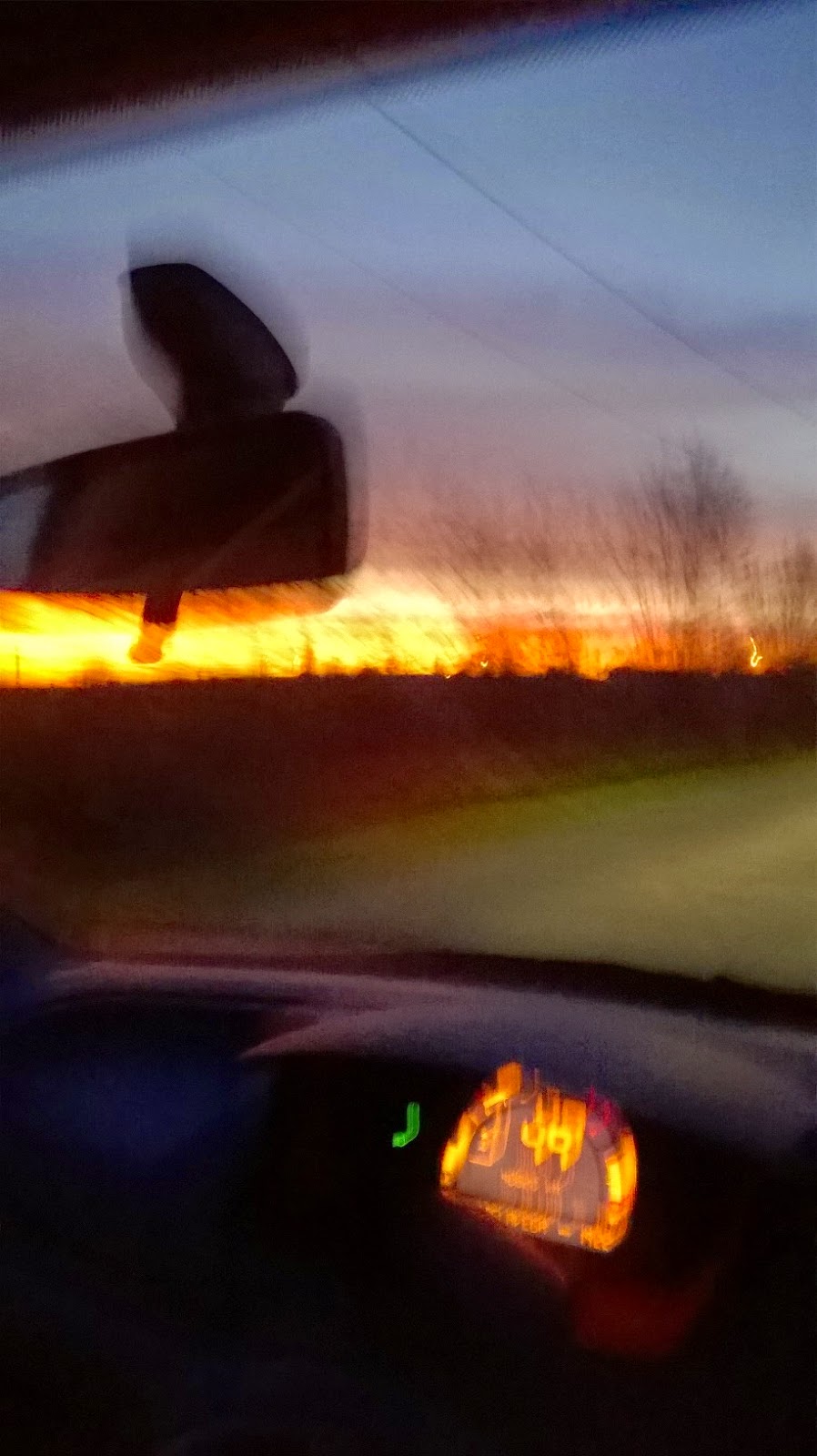 What a weekend we’re having. The start of spring, an eclipse and the highest tide of the century! Well, once every twenty years that is, but the media in this country are really boosting and boasting; Apparently the population of the world is gathered at the Mont Saint-Michel just to watch the sea come in this evening…

The weather is dull, grey, drizzly and cold
Posted by Anji at 3:42 pm No comments:

I don't understand what has happened here.  This flower is 45 centimetres tall while its siblings measure around 23 centimetres: 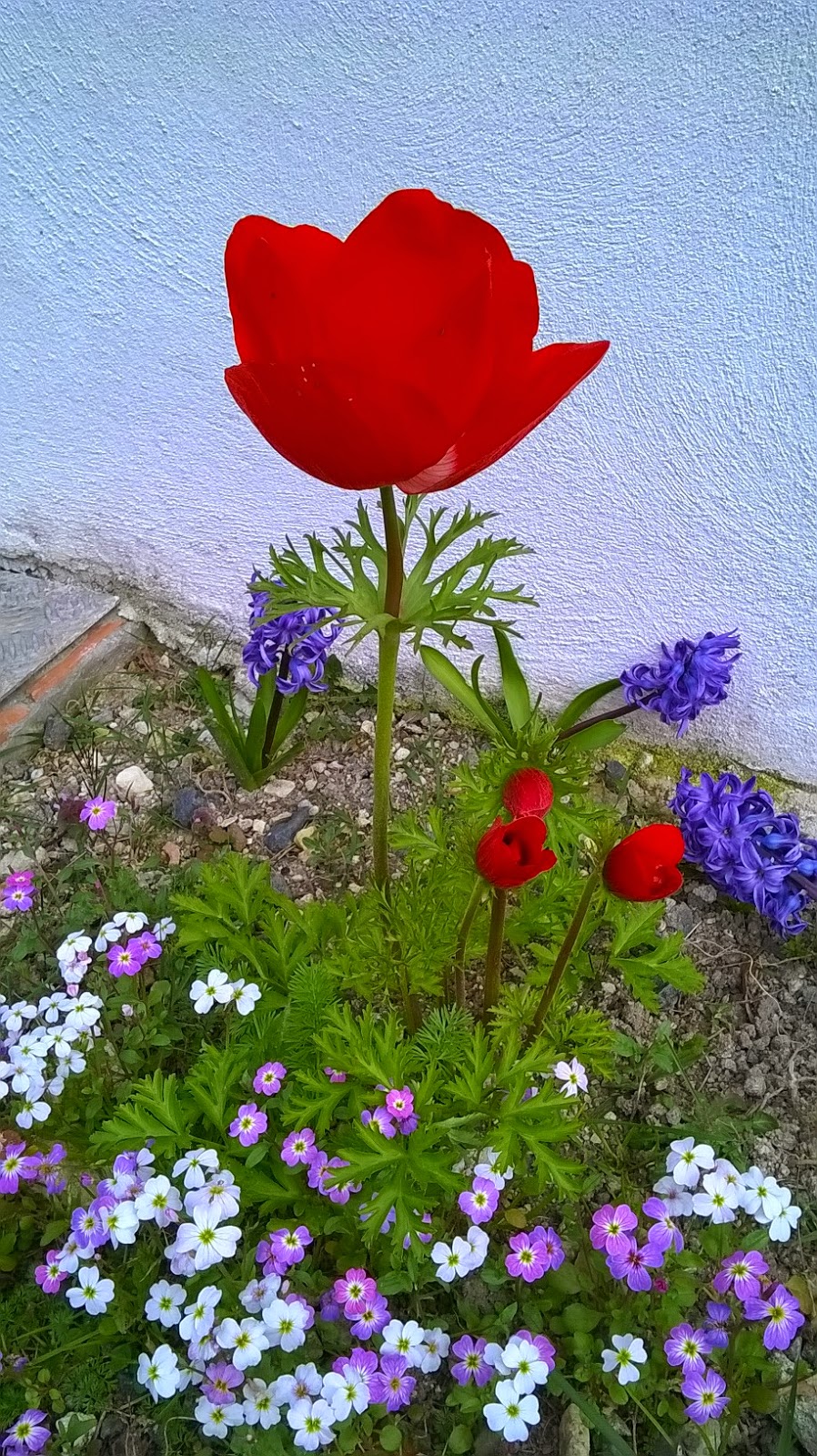 Some of the other anemones are tall, but not as tall and the petals are nowhere as big.
Posted by Anji at 8:25 pm 2 comments:

Email ThisBlogThis!Share to TwitterShare to FacebookShare to Pinterest
Labels: flowers

Recently one of our favourite cafés closed down. Le Duperré has been open under that name at least as long as we’ve been in La Rochelle – over 30 years. Its place was opposite the statue if Admiral Duperré and was the first café on the port as you turned left from the big clock tower.

Over the years it was our favourite place for breakfast with children or friends. If I had blood tests before eating in the morning, having breakfast at the Duperré was a treat (Photo of a breakfast there). We met up with J-M’s parents for the first time outside the Duperré – though we didn’t have a drink there on that day because it was full up. I met blogging friend Caroline and her partner there when they came to La Rochelle too.

Every morning before work, Rob would go for his cup of coffee. You might have seen him, with his black bushy beard, sat at a table outside looking at his phone of reading the newspaper.

It has reopened under a different name and the waiter is the same at least for the time being. Before long we’ll be saying;

“Do you remember when it used to be called Le Duperré, how long ago was that?”
Posted by Anji at 10:52 am No comments:

Spring is in the air

It's so good to see the colours of the flowers at long last. 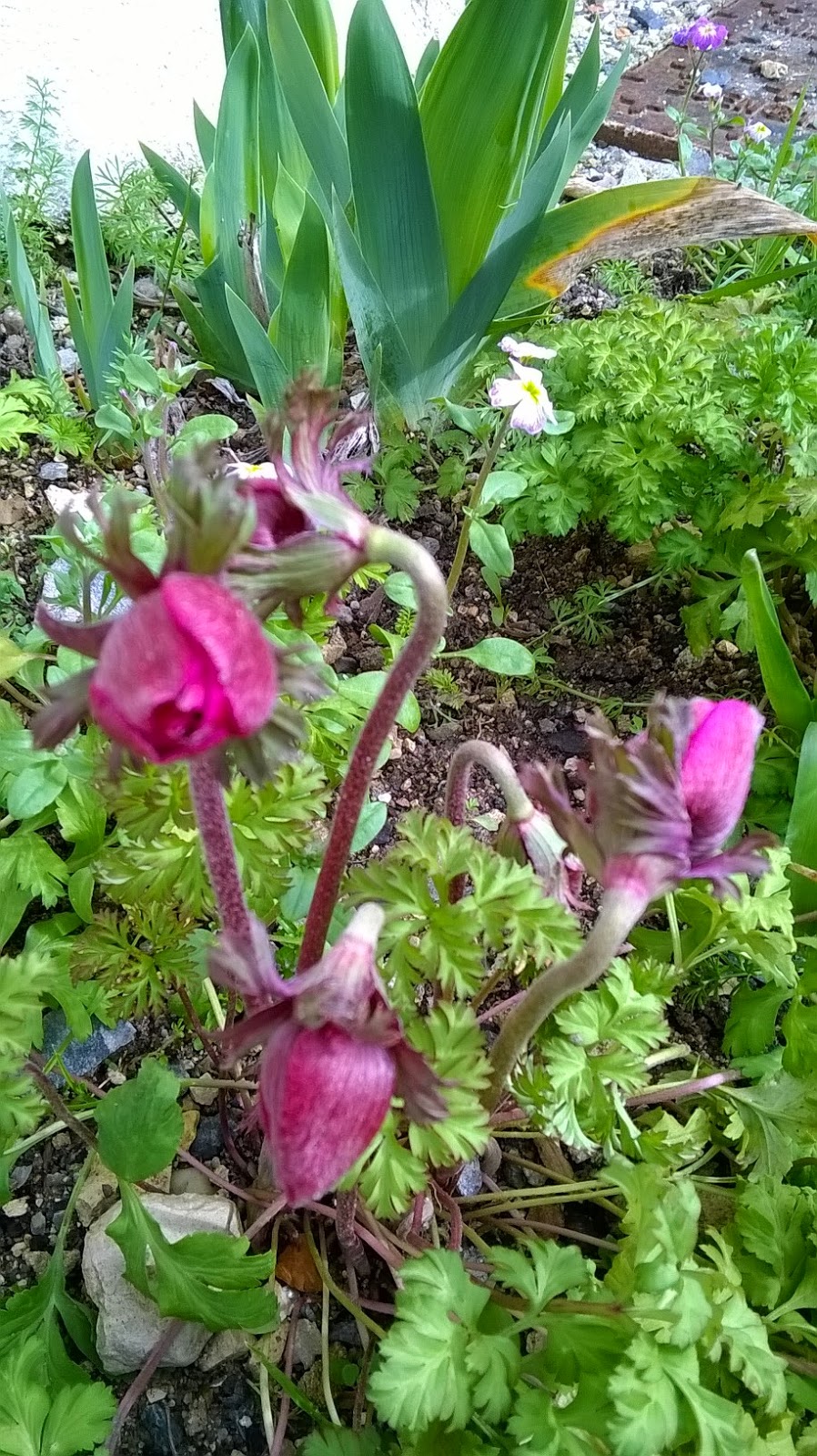 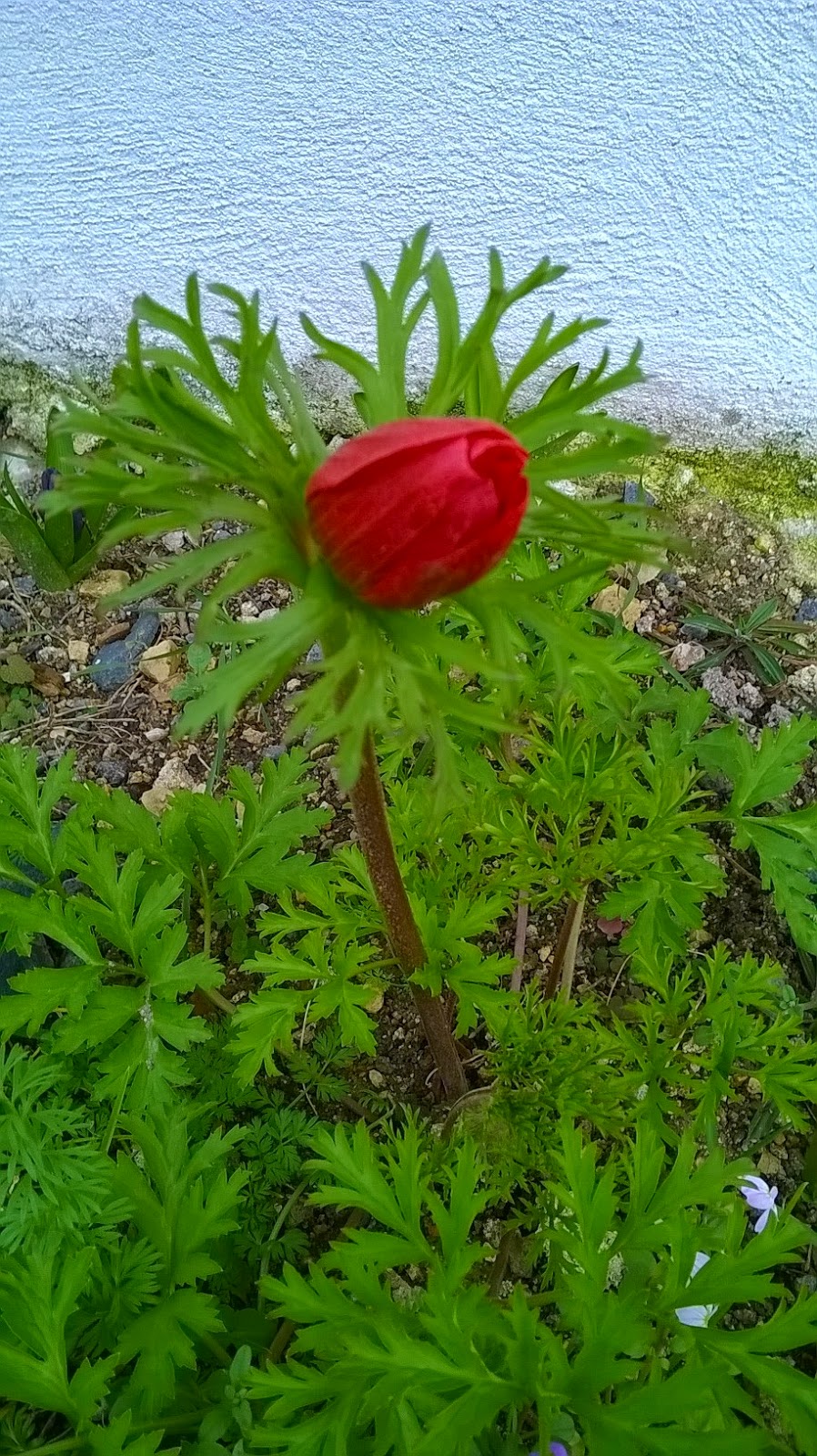 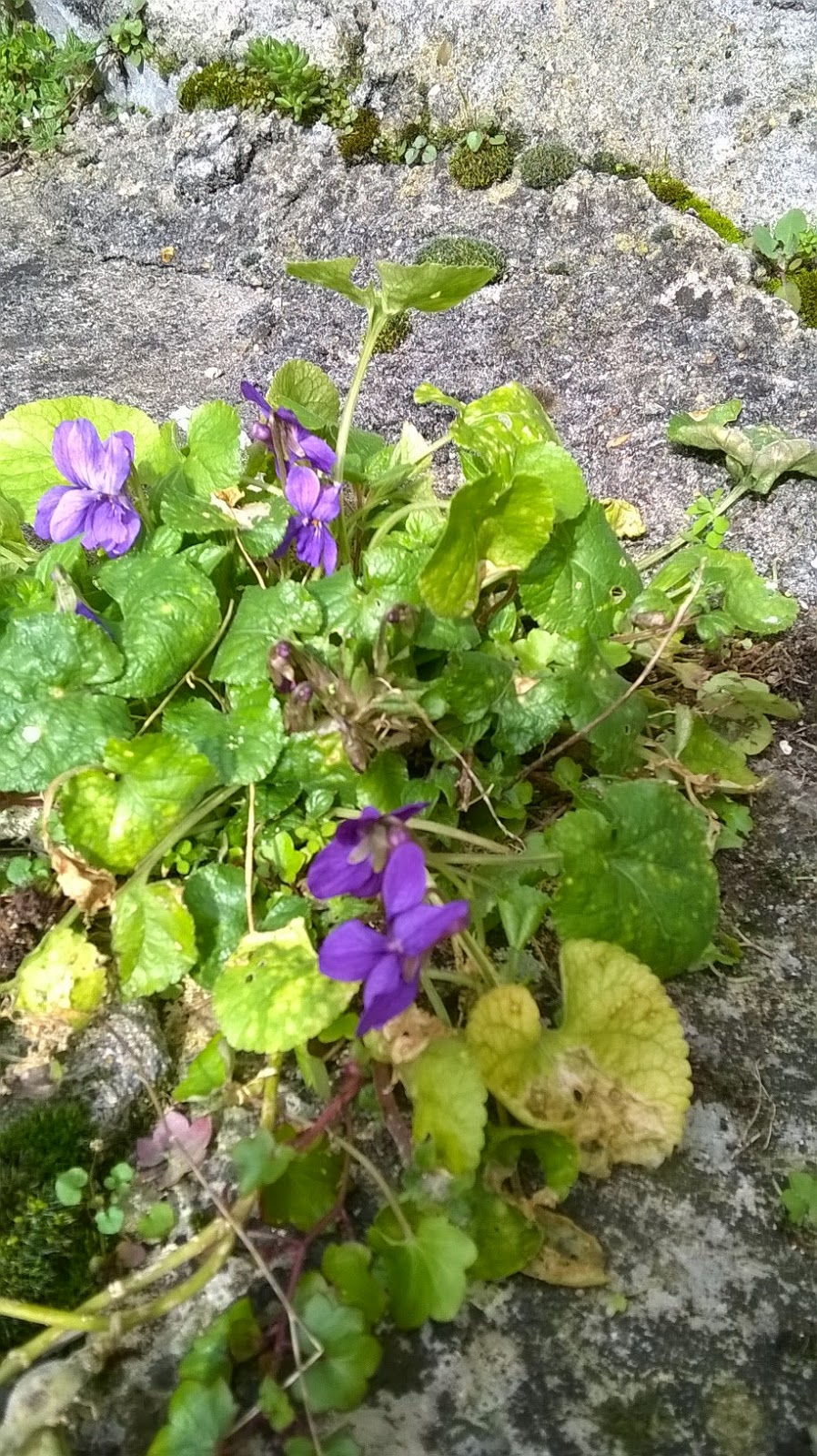 This little violet wedged itself in a crack on the well a couple of years ago.
Posted by Anji at 8:15 pm 5 comments:

Getting better and a bit of Spock

Is it really that long since I last blogged? My excuse is that I had flu, only mildly, as I was vaccinated in November. I think that my sinuses are troubling me now, but it seems to be getting better every day.

Rob and I were saddened by the news if Leonard Nimoy’s death. We all loved Spock, but did you know he could have chosen a role in Peyton Place instead? How the attitude towards Vulcans would have been different if that had been the case!

My cousin Paul wrote on Facebook that he burst into the Star Trek theme midway through his saw solo (yes he plays the saw too).  What a great tribute!  In 1975 I bought a copy of Leonard Nimoy's “Will I think of You?” a lovely book of photographs and a poem dedicated to his first wife. Here is a short extract as my tribute:

“…Only
When I die

And realize
That I am born again

And I
have died
thousands of times…”