At the end of May we went off to the UK for a week. The weather was typically British for the whole of the time we were there, with the exception of the last day of which we spent mostly in the bowels of Stansted airport. Other than that we had a good week.

I met my grandpuppy at last, who is the handsomest, best behaved young dog we have ever met. 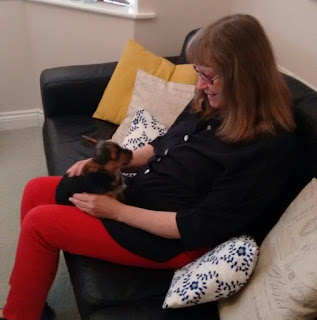 Are you my Grandma?

The main reason for our visit was to see M-I-L in her new home for the elderly. It’s in a beautiful old house with incredible grounds. She has a room which is not too small or too big and looks out onto part of the gardens. She looks better that we’ve seen her for two years at least. The food is good and varied and what we saw looks very tempting.

We managed to get into Worcester and had lunch at the Cathedral. The special on that day was toasted bacon, brie and cranberry sandwich which was to die for. The exhibition of school’s art and crafts was up already in the cloisters (I thought that I would be too early to see it), so we looked at that too.

The free bookshop is still near to the cathedral, so I had two of those and Rob chose three so we put in some money as we didn’t have any to exchange.

I love grandpuppies. For a long time I thought those were the only kind of grandchildren i would ever get.

Jan: I think that it will be the same here. BTW my son thinks that Fletcher has a Jack Russell personality.